Airfield Code Letters - MN ​
​
In addition, there was an extensive bomb dump to the northwest corner of the field around Blackthorn Holt. The WAAF, domestic and sick quarters were located near the B1189 on the site's south side. Accommodation was provided for 1,685 males and 345 females. The airfield was assigned the callsign Coffeestall.  ​

​The site itself is very flat and open to the elements. It can only be imagined how cold it was for ground crews to be working out in the open on the dispersals in winter. In addition, there was very little to stop the wind from the North Sea whipping in and freezing everything in its path. Equally, the accommodation provided was not particularly welcoming either. Both air and ground crews would live in Nissen Huts that would run with condensation, be subject to draughts, and there was a constant lack of fuel for the pot bellied stove to provide heat. Add to this the long walk or cycle ride to their place of work for station personnel, the phrase 'in the middle of nowhere' is very apt. The site opened for operations in October 1943 as part of 5 Group, and station staff worked hard to get the field ready for Metheringham's only resident squadron during wartime, 106.
​
106 Squadron formed on 30 September 1917 at Andover as part of the Royal Flying Corps. The unit served in the role of army co-operation in Ireland before disbanding in 1919. It reformed at Abingdon in June 1938 and was equipped with Hawker Hinds and later Fairey Battles. When war broke out, 106 was based at Cottesmore, from where they flew Handley Page Hampdens with 5 Group mainly in the training role. In early 1941 it took on front-line duties and began regular operations against German Occupied Europe. Conversion to the ill-fated Avro Manchester started in February 1942, although this was short-lived, with Lancasters coming on stream in May of the same year. By this time, the unit was based at Coningsby and came under the command of Wg Cdr Guy Gibson. In September 1942, the squadron moved to Syerston with Gibson posted to 5 HQ at Grantham on 14 March 1943. Four days later, he met with AVM Sir Ralph Cochrane, where he was asked to take on one more operation. From this encounter, 617 Squadron would be formed, and the raid on Germany's dams would be planned and executed. Wg Commander J H Searby DFC took over Gibson's command.

The unit moved from the relative pre-war comforts of Syerston and arrived at Metheringham with their Lancasters on 11 November 1943. Within a week, they were undertaking operations. Thirteen of the squadron's Lancasters joined a force of four hundred and forty for a raid to Berlin. Luck was with them, and no losses were sustained. Aircraft from the unit flew to Berlin four nights later, and again the following night, all the Lancasters returned safely. This spell of good fortune ran out on the night of 26 November 1943 when Lancaster III JB952 ZN-W, flown by Fg Off J Hoboken DFC, was shot down by flak near Frankfurt. All the crew were lost.

Continuing to fly against Berlin, 106 was blessed in having the lowest casualty rate of any Lancaster squadron in Lincolnshire at the time. In nine raids, the unit lost eight aircraft, which was much lower than other squadrons in the area. On 30/31 March 1944, the unit joined in with the operation to Nuremberg. This raid would go down in the history of Bomber Command for all the wrong reasons. Another stamp in the record book would be made, which would make bleak reading for future historians. ​

The Main Force was sent on the 8 hour round trip to Nuremberg on 30/31 March, despite reports that weather conditions were not favourable for the raid. In total, 795 bombers were dispatched, and, in bright moonlight, the Luftwaffe's night fighters were met, which accounted for 82 of the Command's aircraft on the flight to the target. Conditions on the night also led to contrails forming, making it easier for the night fighters to see and intercept their quarry. In total, 94 aircraft were lost on the raid, Bomber Command's most significant loss on one operation of the war.

A further 10 aircraft crashed in England, and 1 was written off due to severe battle damage. The bombing of Nuremberg was ineffective, and at least 120 bombers dropped their loads on Schweinfurt, the cause of this being poor navigation brought on by poorly forecast winds. For 106 Squadron, 3 of their Lancasters failed to return: JB566 ZN-C, ND535 ZN-Q and ND585 ZN-J, all of which were believed to be the victims of night fighters. Of the 21 crew, just 4 survived to become POWs. Another of the unit's aircraft, ND335, was also attacked by two night fighters but managed to fly back to Manston, where its undercarriage collapsed upon landing. There were no injuries to the crew.

When looking at Metheringham's losses, it should be considered that this was emulated across many Bomber Command airfields in Britain. Multiply the losses up, and it is not hard to see how the final count of bomber crews who did not live to fight another day reached 55,573 by the war's end.  ​

At 21.26hrs on 26 April 1944, Flight Engineer Sgt Norman Jackson took off on a mission to Schweinfurt aboard Lancaster I ME669 ZN-O. During the flight, a night fighter attacked the aircraft, which set fire to the starboard inner engine. Jackson activated the internal extinguisher, but this was ineffective. There was a danger that the fire would spread to the aircraft's fuel tanks. He knew there was only one thing to be done, and this was actually to go outside and put the fire out. He grabbed a fire extinguisher and, with the bomb aimer and navigator holding onto Jackson's parachute chords, climbed out of the upper escape hatch into the 200 mph slipstream.

Jackson proceeded to lower himself onto the starboard wing. He crawled towards the burning engine, where he proceeded to extinguish the fire. As Jackson edged back towards safety, the Lancaster was again attacked by a night fighter. The attack injured Jackson in the legs, and the engine again burst into flames which caught him. He lost his grip and was flung into the aircraft's slipstream. The crew could see what was happening inside, so they played out Jackson's parachute and let go. Luckily the chute opened, and Jackson landed heavily in a thicket bush. ​The Lancaster subsequently crashed with the loss of the pilot Fg Off F M Mifflin DFC and Flt Sgt I I Donovan DFM (RCAF). The other members of crew survived to become POWs.

The operation to Schweinfurt had not gone well for 106 Squadron. Five of their Lancasters failed to return, ME669 ZN-O, JB562 ZN-M, JB601 ZN-V, ND850 ZN-C and ND853 ZN-J. Of the crews, 22 were killed, 10 became POWs and 4 evaded.
​A superb history of RAF Metheringham has been written by Richard Bailey titled In The Middle of Nowhere (available from Metheringham Visitor Centre www.metheringhamairfield.co.uk. There is a fascinating piece within the book relating to two of the Lancasters used on Operation Chastise over the night of 16/17 May 1943.  www.airshowspresent.com/lincolnshire-aviation-heritage-centre. ​
​
The airfield became recognised as an Air Evacuation Centre for the US Army, and there are instances recorded of casualties being flown in directly, although this was rare. Just under 1,700 passed through on their way back to the States up until the war's end. Today Dakota III KG651 resides at the Visitor Centre to commemorate the types past connection with the airfield.
​
On 7 July 1944, Lancaster JB641 coded ZN-X took off from Metheringham to bomb a V1 storage site near Paris. The crew were on their 28th mission but were lost following enemy action with the aircraft crashing near the village of Quetteville. None of those on board survived. In 2013 a book titled Seven Short Lives, written by S B Potter, was published. The book details the life stories of each crew member and is a compelling read as it brings to the forefront the human side of those that were lost during the bombing campaign.

It was unusual for any bomber in wartime to achieve the accolade of undertaking 100 operations. However, on 4 November 1944, Lancaster III' JB663 ZN-A ' King Of The Air' took off from Metheringham and headed for its assigned target of Ladbergen. With successful completion in the hands of Fg Off F E Day, the aircraft returned home and notched up a century. Its career had begun at Syerston in November 1943, and by the end in January 1945, 111 operations had been flown. However, such a feat meant little at the war's end; JB663 was struck off charge in October 1946 and scrapped.

One of the worst enemies of bomber crews was fog. To overcome this natural occurrence, fog dispersal equipment, known as FIDO, was installed at selected airfields. Metheringham was one such airfield where FIDO was utilised, with the installation taking place in January 1944. By May, the system was in place with a Lancaster of 106 Squadron with engine trouble following a raid on Tours, the first aircraft to use FIDO at Metheringham.

​There were incidents while using FIDO, one involving an 83 Squadron Lancaster at Metheringham, which occurred on 22 December 1944. PB533 had taken off from Coningsby at 16.36hrs for an operation to the synthetic oil refinery at Politz.
​
106 Squadron's last raid of the war took place on the night of 25/26 April 1945. Fourteen Lancasters from Metheringham joined fellow 5 Group Lancasters to bomb Vallo Oil Refinery near Tonsberg in Norway. This operation was the last of the war carried out by Lincolnshire based Lancasters.

The unit was the only operational squadron to use Metheringham. However, 1690 Bomber Defence Training Flight moved in from Scampton in the autumn of 1944. The Flight flew Spitfires and Martinets and provided fighter affiliation training for 5 Group.

​In June 1945, 467 Squadron arrived and began training for Far Eastern operations, but with the end of the conflict with Japan, they were soon declared redundant and disbanded on 30 September 1945. During its time at Metheringham, 467 Squadron had a famous Lancaster within its ranks. B.1 R5868 completed 137 operations over Europe and is now preserved at the Royal Air Force Museum Hendon.
​ 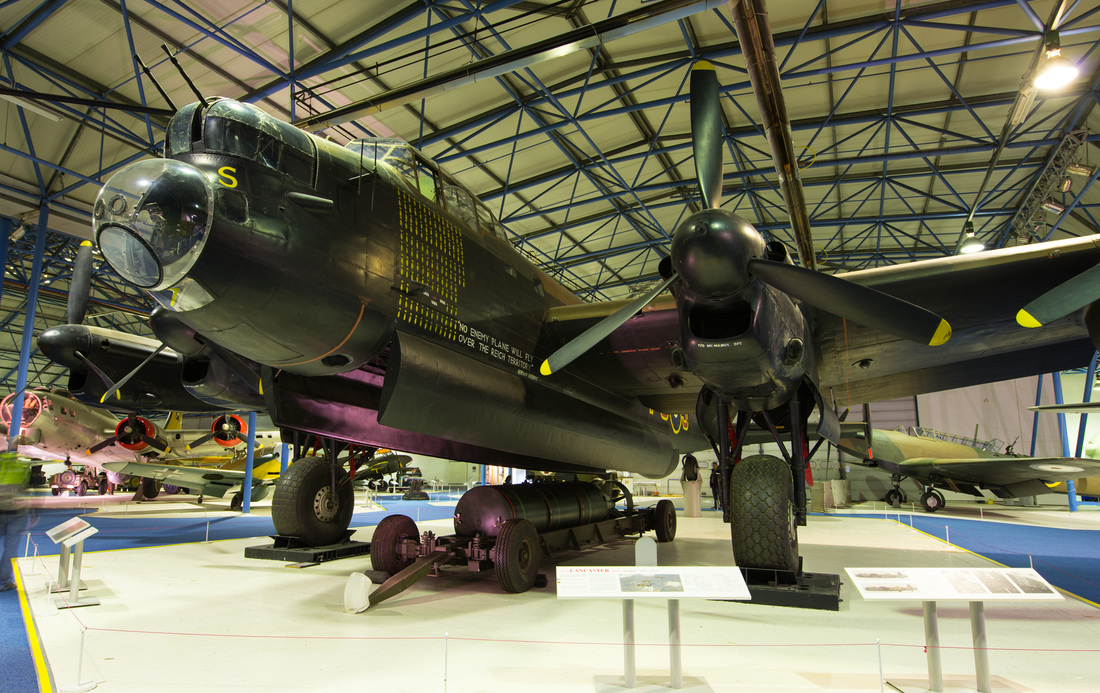 Avro Lancaster B.1 R5868 - Richard Hall
A further arrival took place during the afternoon of 15 October 1945. 189 Squadron, with 17 Lancasters, attempted to land at Metheringham, but visibility was poor, so permission was granted to light FIDO. All the Lancasters touched down safely, but their stay was short, with the squadron disbanding on 20 November 1945. In February 1946, 106 Squadron disbanded at Metheringham, and the airfield closed. The unit had won 267 decorations and one VC, with 187 aircraft lost while flying on operations from Metheringham.