Written By Richard Hall
​
​RAF Faldingworth was located four and a half miles from Market Rasen to the southeast of the River Ancholme. Originally, the proposed airfield site was used as a decoy airfield known as Toft Grange for RAF Hemswell, with mock-ups of Whitley bombers scattered around the field.

Faldingworth was allocated to 1 Group and acted as a satellite to RAF Lindholme in South Yorkshire. In 1943 with the Allied bombing campaign in full swing both by day with the USAAF 8th Air Force and by night with Bomber Command, the need for crews to replace operational losses was paramount. The task within Bomber Command to train fell upon the Operational Training Units (OTU) and later Heavy Conversion Units (HCU). These units were usually equipped with war-weary aircraft, which certainly did not make the task for crews any easier with the added factor of aircraft reliability to concern themselves.
​
No 1667 Heavy Conversion Unit
A far more serious accident occurred on 16 December 1943 when Halifax V EB185 crashed at 23.25hrs during a night exercise one mile northeast of the airfield. All seven of the crew perished as a result of the crash. ​
​ ​​
1667 HCU's time at Faldingworth was short, but one further serious accident was to occur before the unit's departure. On 23 January 1944, Halifax V DG358 took off from the airfield at approximately 14.40 hrs for a high-level cross country training flight. While flying at 20,000ft, the bomber's starboard outer engine failed, forcing the aircraft to lose height. Descending into thick storm clouds, the Halifax quickly iced up, which caused it to go out of control. The machines starboard wing became detached, which sealed the aircraft's fate and its crew. Coming to ground at Cwm Farm, Bryn y Groes, Bwlch y Fridd in Wales with the loss of all nine on-board. By the end of February 1944, 1667, HCU had moved out to RAF Sandtoft, and Faldingworth became part of 14 Base under the control of RAF Ludford Magna.
​ ​​
After the invasion by Nazi Germany, many personnel fled their countries to seek refuge in Great Britain, where some continued the fight against their invaders. One such group were Polish airmen who formed squadrons within the RAF, both with Fighter and Bomber Command.

This operation was to be the last undertaken by Bomber Command Wellingtons, and all aircraft returned safely. However, the type did continue for a time as Radio Countermeasures aircraft and with OTUs within Bomber Command.

At the time of 300 Squadron's arrival at Faldingworth, the unit was in the process of converting to Avro Lancasters. The first operation for the newly converted squadron was to Rouen on 18/19 April 1944 to bomb railway yards. Bomber Commands focus now was support of the upcoming invasion of Europe. Consequently, the disruption of the French railway system was a high priority to delay German troop and equipment movements. Two hundred and seventy aircraft took part in this raid, with all returning safely.​

The first operational losses for 300 Squadron while flying from Faldingworth occurred on 24/25 April 1944, when Lancaster I LL855 BH-G and Lancaster III LM486 BH-C failed to return from a raid on Karlsruhe, with the loss of all crew.

It was not always enemy action that caused losses. On 22/23 May 1944, Lancaster I LL857 BH-B took off at 22.40hrs for an operation to Dortmund. The aircraft was obliged to turn back following engine trouble and jettisoned part of its bomb load over the sea. As the Lancaster approached Faldingworth's runway, it collided with the airfield's gunnery butts. Two crew members were killed instantly, with six others being pulled from the wrecked aircraft, one of whom died of his injuries a few hours later.

1546 Beam Approach Training Flight
​
One lode would transmit a continuous 'N' in morse whilst the other an 'A'. The space in between where the lodes overlapped produced a continuous tone. A pilot, when on course for the runway centreline, would hear this continuous tone and, if he deviated from the course, would hear an N or A. Learning to fly while hearing the continuous tone was a vital skill to be mastered by pilots as it allowed them to land in at night and in times of poor visibility, something very often experienced at bomber airfields. The Flight remained at Faldingworth until its disbandment in January 1945.

Squadron Expansion
​
In June 1944, a second flight for 300 Squadron was formed, but there was a shortage of Polish crews, necessitating the use of personnel of other nationalities to equip the flight until additional Polish personnel became available.

Bomber Command well recognised the bravery and determination of the Polish crews, and they went on to fly in the main offensive until the end of operations. The final raid for 300 Squadron was on Berchtesgaden on 25 April 1945. The last task for the squadron of the war was in support of Operation Manna on 7 May 1945, where supplies were dropped to starving Dutch civilians.

Although 300 Squadron was the only operational unit at Faldingworth in the war, C Flight of 166 Squadron formed at the airfield with Lancasters in October 1944, before moving to RAF Kirmington. During their time at Faldingworth, 300 Squadron flew on 138 operations, which equalled 1,216 sorties, in the process losing 30 aircraft, a 2.5% loss rate.

Later in October 305 (Ziemia Wielkopolska) Squadron flew its De Havilland Mosquitos IVs into Faldingworth from Germany. No 305 was disbanded at the airfield in January 1945, effectively spelling the end of flying at Faldingworth. The station was then placed under Care and Maintenance parented from RAF Hemswell.
​ ​
Post War Use
​
The site came under the control of 92 Maintenance Unit and was completed by 1957. ​With the storage of nuclear weapons, Faldingworth required a much more robust security regime. Watch towers were constructed, and layers of fencing, both mesh and concrete topped with barbed wire, greeted any potential trespassers. The inner facility compound was accessed through electrically operated gates, with this area protected by free-roaming guard dogs.

In 1969 free-fall nuclear weapons were withdrawn from active service, and the RAF's use for Faldingworth ended with it closing in 1972.

Subsequently, Faldingworth was acquired by The British Manufacture and Research Company and Oerlikon (later owned by Royal Ordnance), who used the site as a test and production facility. In addition, Royal Ordnance used the site for armament storage and experimentation until putting it up for sale in 1996.

RAF Faldingworth was mostly sold off for agriculture in 1998, but some of the site remains in use as a firing range, explosive testing facility, research and development and film work. 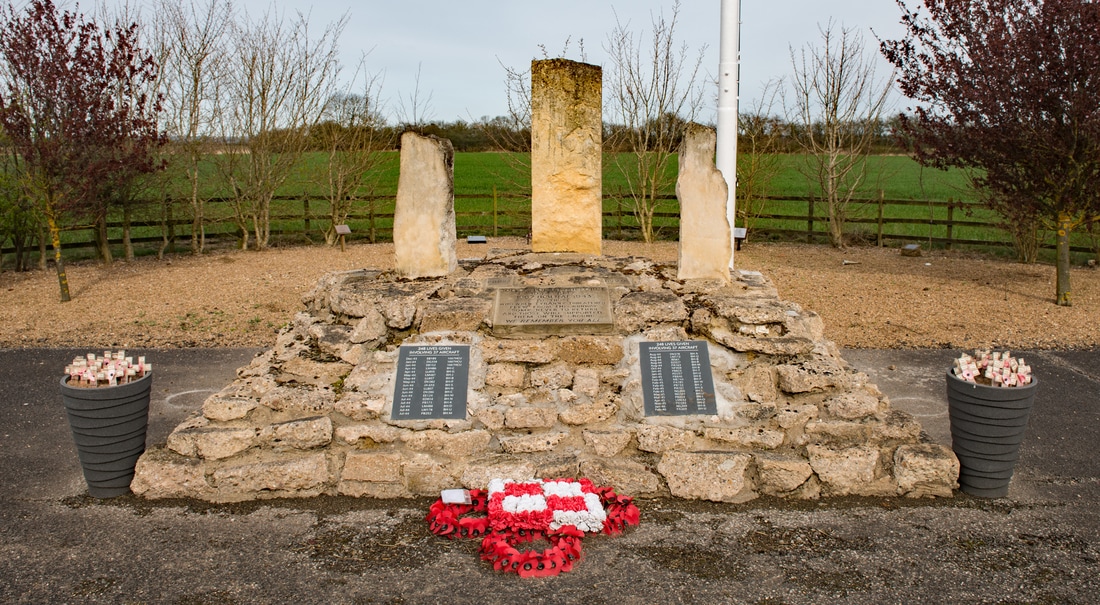 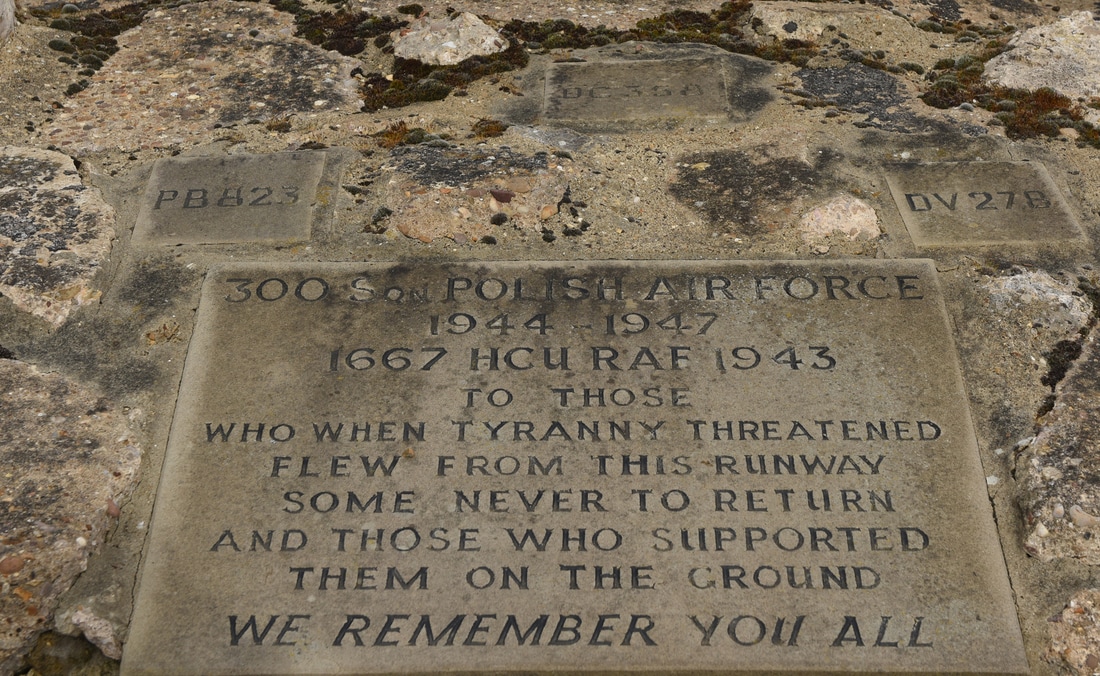 The memorial is constructed from pieces of concrete from the runways, perimeter track and buildings. Within the base of the memorial small parts of aircraft lost from Faldingworth have been placed. In addition, pieces from Polish crewed aircraft have been buried in soil from Masovia, Poland. Three columns of stone rise from the memorial base, which represent Lincoln Cathedral, a landmark very familiar to Bomber Command crews. Located behind the memorial is Faldingworth's old windsock post.

Below shows some of what is now left at RAF Faldingworth (2016). 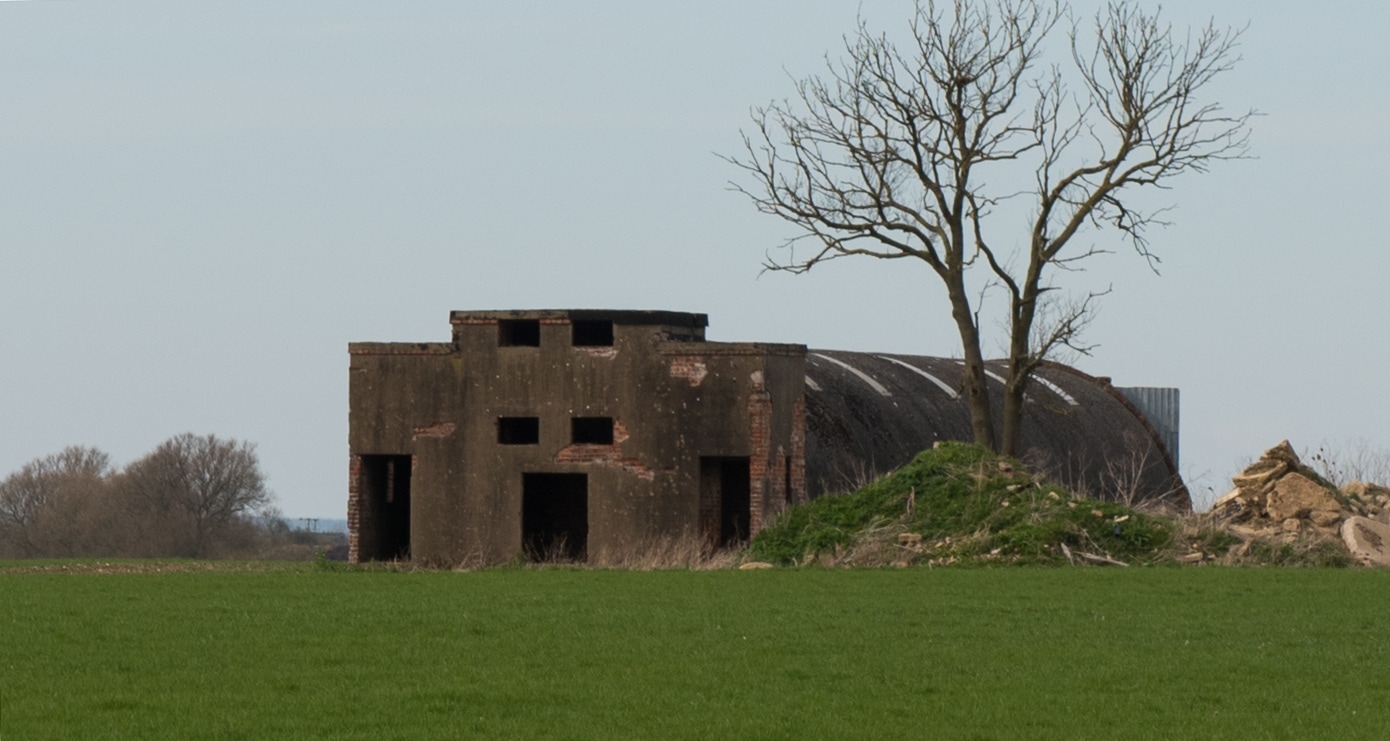 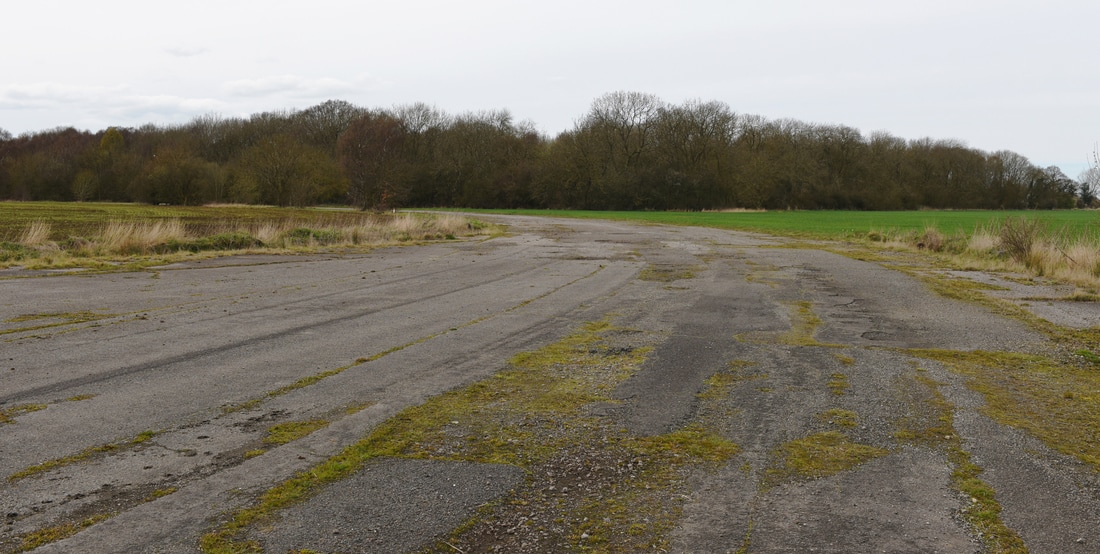 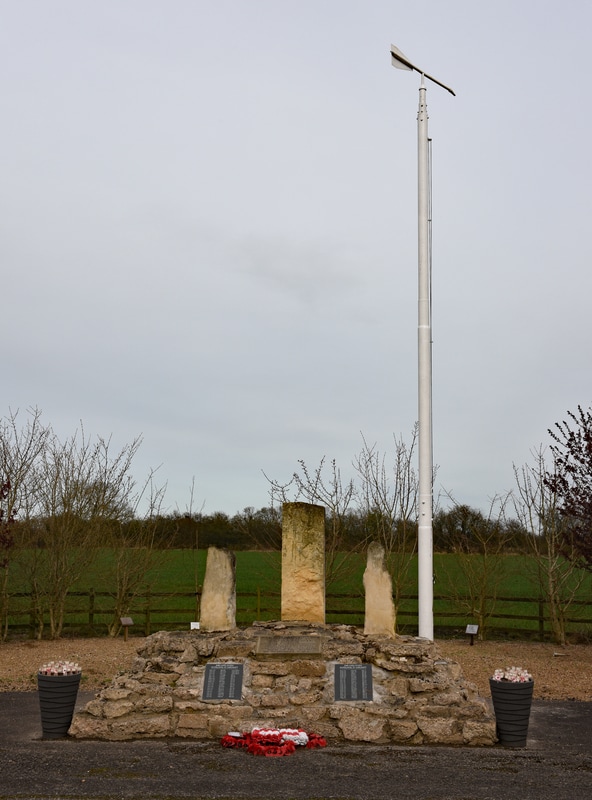 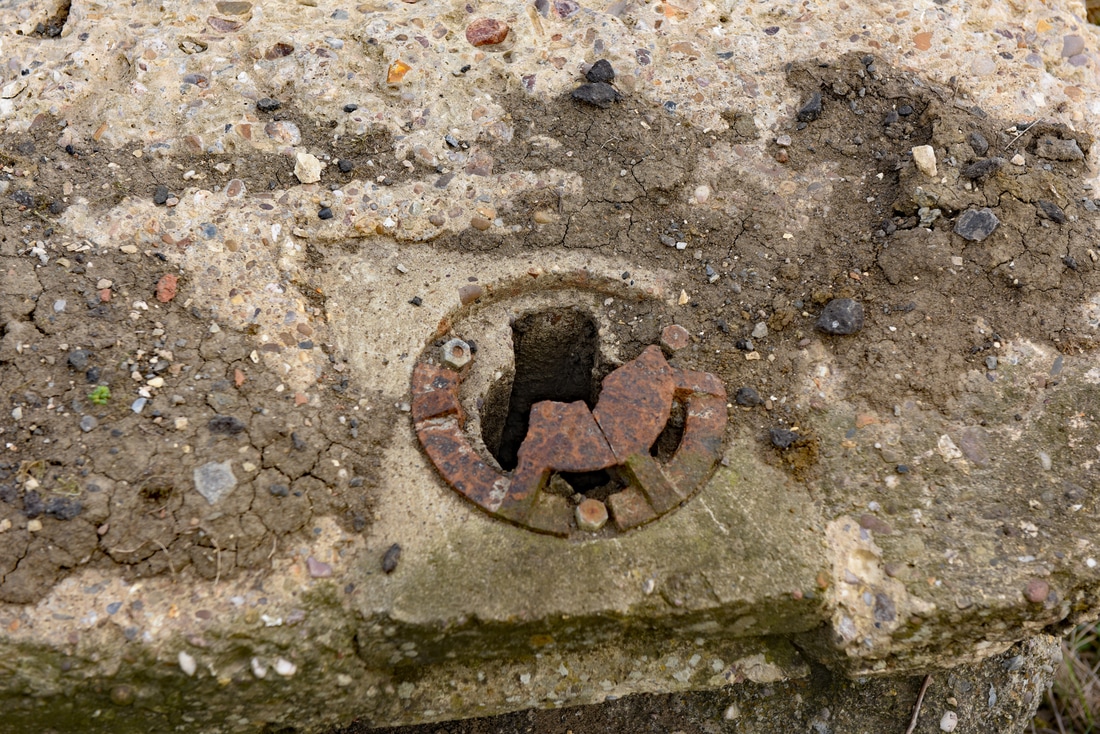 300 Squadron's code letters of BH have been incorporated into the design of the gates. 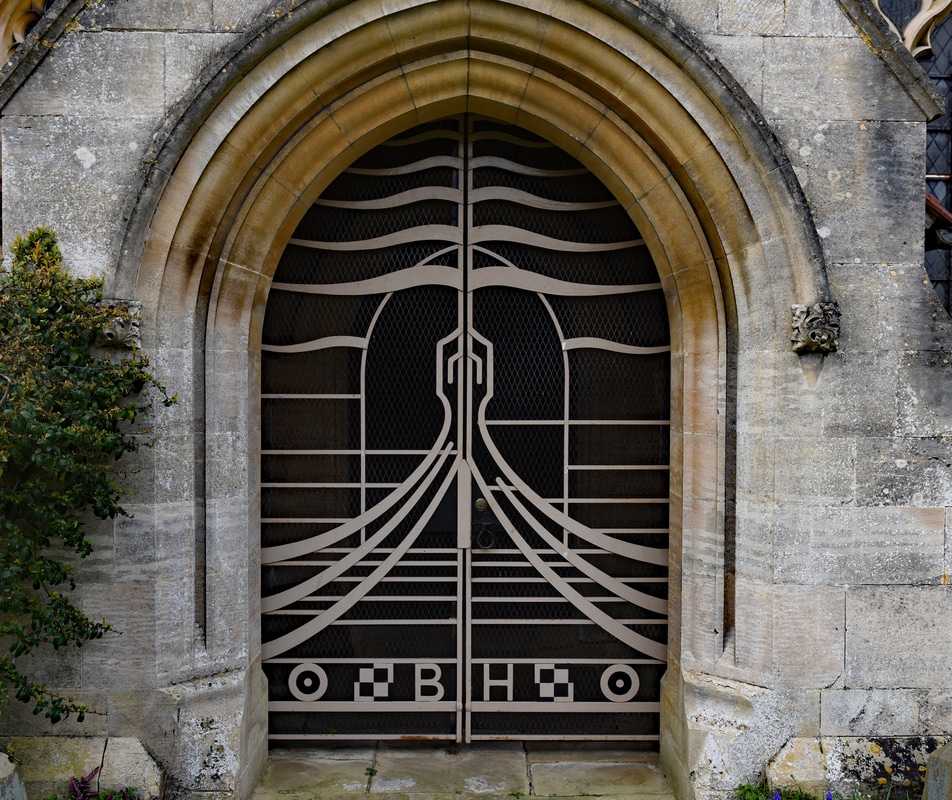