RAF Binbrook was one of the last Expansion Period airfields to be built and is situated high in the Lincolnshire Wolds. Although now disused, the site still holds a commanding viewpoint and is visible for many miles as it rises out of the flat Lincolnshire landscape. For many people, the old airfield has a special affection in their hearts, from those with an interest in the days of Bomber Command, through to the Cold War era of the Lightning. 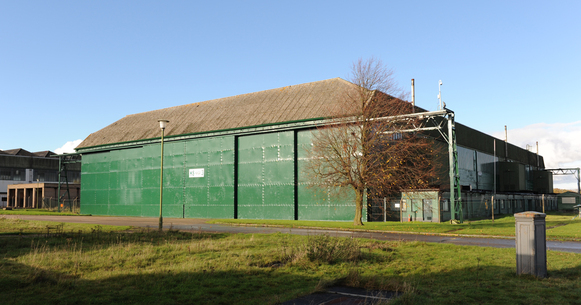 One of five remaining C Type Hangars
Construction started in the spring of 1938, but the airfield did not open until 27 June 1940, as part of the newly reformed 1 Group Bomber Command. Five C Type hangars were built along with administration, technical and barrack sites. The landing ground was grass with 18 pan type hardstandings. A lack of concrete runways was a drawback, often resulting in a waterlogged landing ground.

The 12 May was a bad day for 12 Squadron, who sent five Battles to attack the bridges at Veldwezelt and Vroenhoven, with none of the aircraft returning. ​Leading the attack on the Veldwezelt, Battle I P2204 PH-K, was flown by Fg Off D E Garland, with observer Sgt T Gray and rear gunner LAC L Reynolds. Met with a hail of anti-aircraft fire, P2204 was shot down with the crew killed. Garland and Gray were both awarded the Victoria Cross (VC) for their valour in pressing home the attack, which is believed to have damaged the structure. These were the first VCs awarded to an RAF crew of the war. However, Sgt Reynolds was given no medal as in official circles, it was considered he was not part of the decision making process. The squadron continued to contribute to the Battle of France before withdrawing along with 142 Squadron to Finningley in mid-June. Early in July 1940, both units relocated to Binbrook, from where they began to mount attacks on invasion barges that were building up along the French coast. During one of these operations, Battle I L5568 from 12 was shot down by a Blenheim of 29 Squadron near Mablethorpe. The crew Fg Off B Moss, Sgt T Radley and Sgt B Long did not survive and now rest in the churchyard of St Mary's Binbrook.

​
Duties included providing targeting facilities to local AA units and 1 Group squadrons, air gunner leaders course, air bomber training unit, aircraft recognition and Browning machine gun courses. The Flight left Binbrook in September 1942 for Blyton but were back with the new name of 1481 (Bombing) Gunnery Flight in May 1943, before again departing for Ingham in March 1944. ​
Operations for 12 Squadron started on 9/10 April 1941 with an attack on Emden, this resulting in their first Wellington loss in action when W5375 was shot down into the IJsselmeer by a Me 110 night-fighter, piloted by Oblt Egmont Prince zur Lippe-Weissenfeld of 4/NJG1. All crew were lost, including Wg Cdr V Blackden, the squadron's CO, and their bombing and gunnery leaders, Fg Offs Broughton and Marshall. Nevertheless, the unit continued with operations which included participation in the 1,000 bomber raids later in 1942. So hard pressed was Harris to achieve the figure of a grand, three AW Whitleys joined the operation from 1481 Flight who was operating from the airfield. In September of the same year, the unit left Binbrook, relocating to Wickenby, where conversion to the Avro Lancaster took place.

During September 1942, Binbrook went back into a construction phase with the laying of the standard concrete runways found at most heavy bomber airfields. These were orientated through 04-22 (2,000 yards), 09-27 (1,415 yards) and 15-33 (1,429 yards). A perimeter track was also laid together with the addition of 19 loop hardstandings. Accommodation was provided for 2,298 males and 420 females.

In April 1943, Binbrook was named as the parent station of 12 Base for 1 Group. In May of the same year, 460 Squadron (RAAF) arrived with Avro Lancaster bombers. This was an Australian unit and was the station's sole operational squadron for the rest of the war. 460 Squadron had three full flights of Lancasters with up to 36 aircraft on strength, leading to the unit being credited with dropping a higher tonnage of bombs than any other in Bomber Command.
​
​
​In July 1945, 460 Squadron left for East Kirkby and at the end of the summer 12 moved back in from Wickenby, to be later joined in October by 101 Squadron from Ludford Magna. In April and May, 9 and 617 Squadrons arrived respectively, 12 Squadron left for Waddington in July 1946. 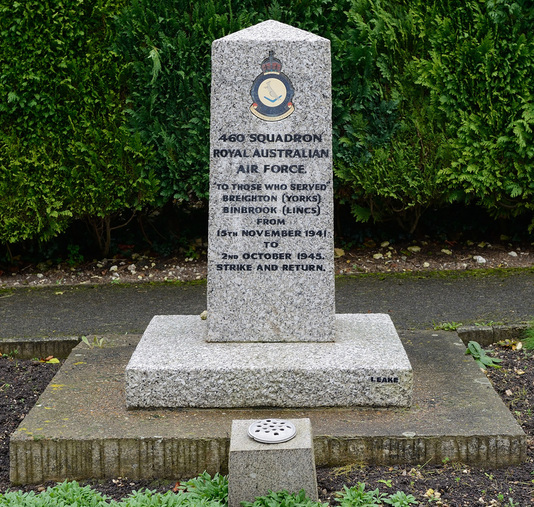 Memorial to No 460 Squadron (RAAF) located in Binbrook Village
By this time, the squadrons were re-equipping with Avro Lincolns and soon moved into the jet age with the English Electric Canberra in the early 1950s. By 1959 five units were equipped with the type. These were 9, 101, 109, 139 and 617. At this time, the squadrons began to relocate or disband and Binbrook was placed under a care and maintenance status.
In October 1965, Binbrook became home to one of Britain's most iconic and well-loved aircraft. The English Electric Lightning was stationed at the airfield with 5 and 11 Squadrons and the Lightning Training Flight (LTF). For the next 23 years, the quiet countryside around Binbrook echoed to the sound of reheated Rolls Royce Avon turbojets.
​
Following the withdrawal of the Lightning F.1 and F.1a, a Targets Facilities Flight (TFF) was formed in February 1966, surviving until December 1973, when along with similar flights at other RAF airfields, it was disbanded. In April 1987, the LTF disbanded to be followed on 31 December 1987 by 5 Squadron. On 22 August 1987, the final airshow took place at Binbrook, the swansong for both the Lightning and the airfield. Photographs from the airshow can be found here​: The Last Lightning Airshow
​
The final front line Lightning Squadron, 11, was disbanded at Binbrook on 29 April 1988. The airfield was then deemed surplus to requirements, although it acted as a Relief Landing Ground for RAF Scampton. However, in July 1989, it took a starring role in the film Memphis Belle.
​
Five Boeing B-17 Flying Fortress aircraft arrived for the filming, one of which was lost when it crashed and burnt out on take-off. Fortunately, no one was killed in the incident. The five B-17s that took part in the filming were all G models and are listed below with their country of origin:

The following photographs have been kindly supplied by Kevin Day and show B-17s at Binbrook during the filming of Memphis Belle. The aircraft have been converted to resemble the F model of the B-17 used in the 8th Air Force's raids over Europe in 1943. The B-17 lost during the filming was B-17G F-BEEA. For those with an interest, the report into the incident can be found by clicking this link: www.aaib.gov.uk 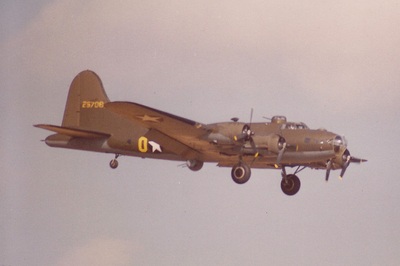 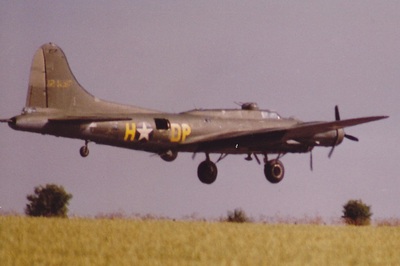 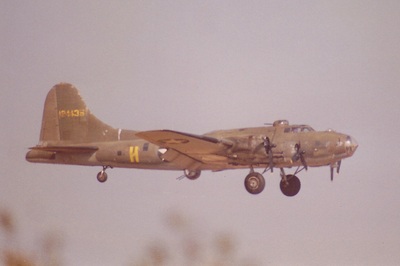 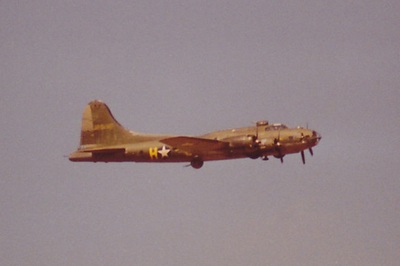 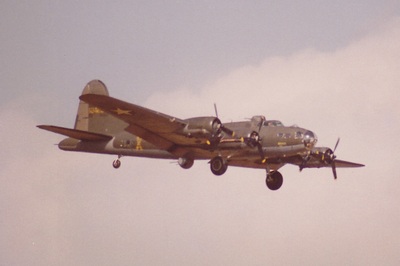 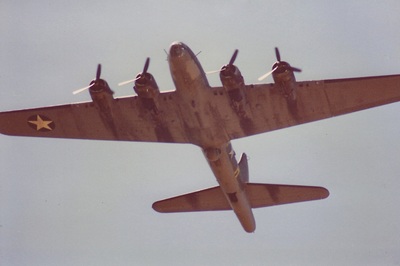 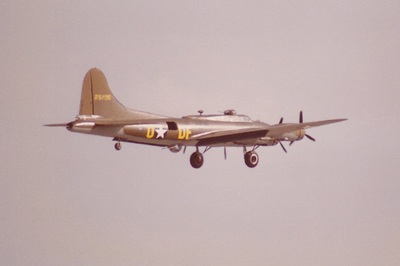 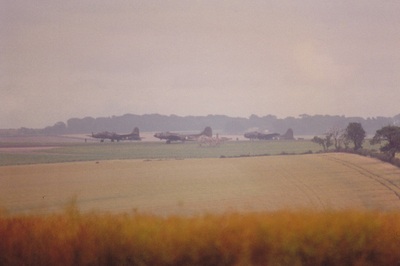 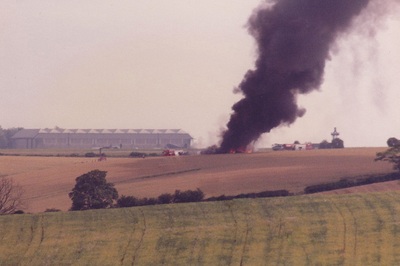 Binbrook closed on 12 July 1992 with the last unit to grace the skies above the airfield  Vigilant motor gliders of 643 VGS. ​Between 1993 and 1997, a number of ex RAF Jet Provosts acquired by Global Aviation were stored at the airfield before onward sale. The Q Shed was also used as a paint shop for the respraying of some of the aircraft. The JPs on arrival was accompanied by Shorts Tucanos, which were used to ferry the JP pilots.  I am indebted to Steven Hand for supplying the information. He also gave me this memory of his time at Binbrook after closure.
​
"They was great days up there, we would have the whole still intact airfield to ourselves, on my lunch breaks I would go for a run from the Q sheds down the runway and back, and sunbathe on the grass outside listening to the Skylarks. Delivery days were great as the airfield came to life, a sweeper from my place (Scampton) would sweep the ASP and the runway, a fire crew would pitch up along with the medics and ATC would operate in the still in tact tower. Then the aircraft would arrive in the overhead the JP's doing some last minute aerobatics and then the Tucanos landing after them".
Photos & Words - Jeff Bell
"I did three or four trips up to Binbrook with an ATC Assistant in an RAF car complete with mobile radio pack to use for comms. We also took a Fire Appliance and an ambulance with medics. It was usually two JP’s at a time with two Tucano’s as crew ferry back to Scampton. On arrival we had to inspect the runway to ensure it was safe to use and then sat on the taxyway awaiting the radio call when the aircraft were inbound. One visit was in vain however, as the cloud was too low and all four diverted to Scampton ! We did manage a peek up the Tower on one visit, but it had been classed as unsafe due to the arson attack, approach room was gutted, such a shame ! My last visit there was on Wed 21 Sep 94 and I logged the following; 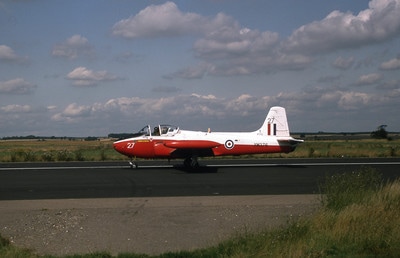 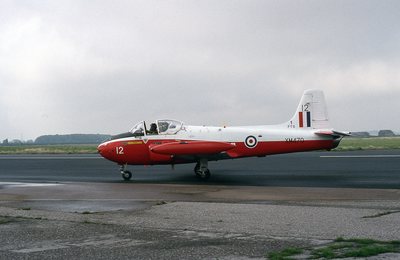 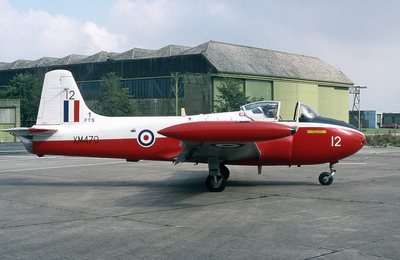 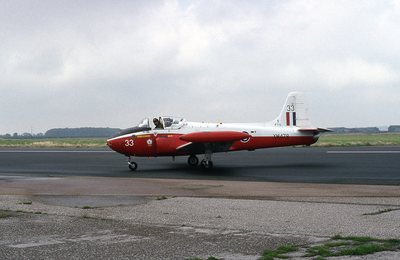 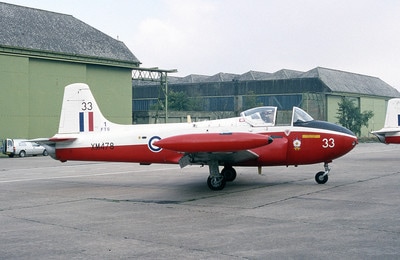 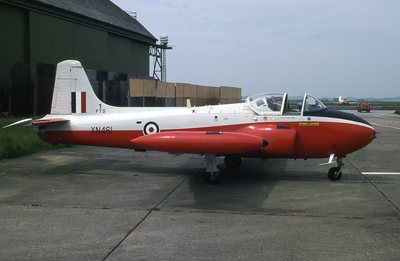 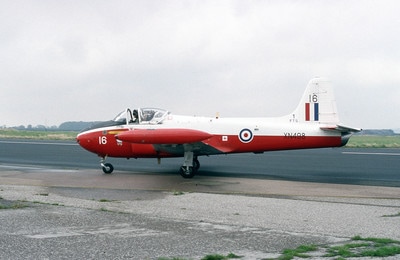 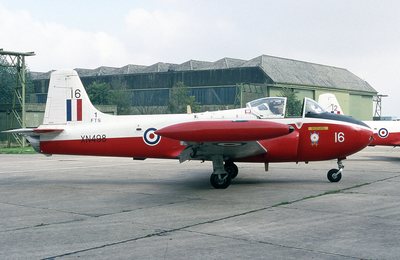 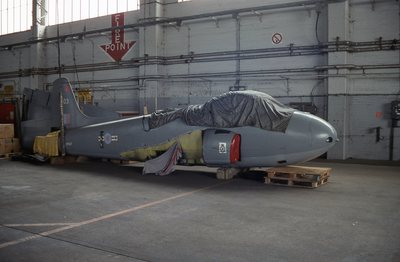 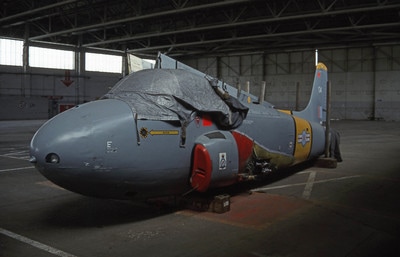 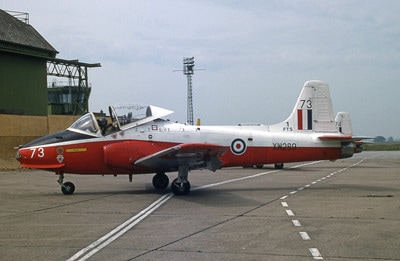 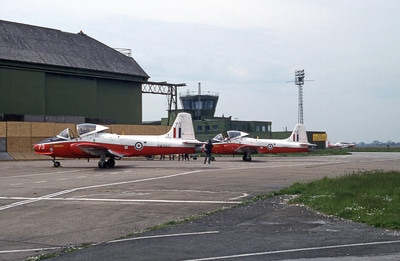 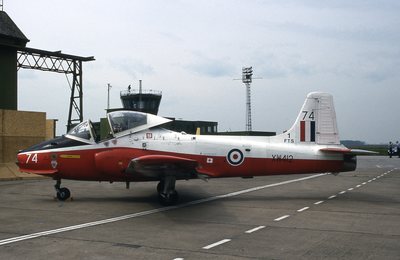 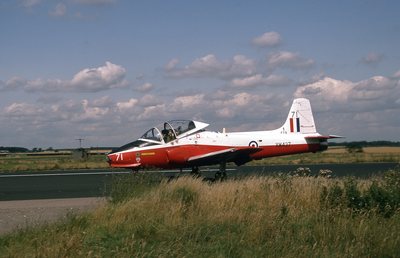 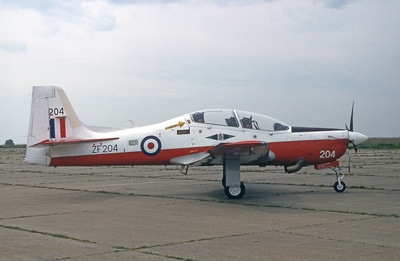 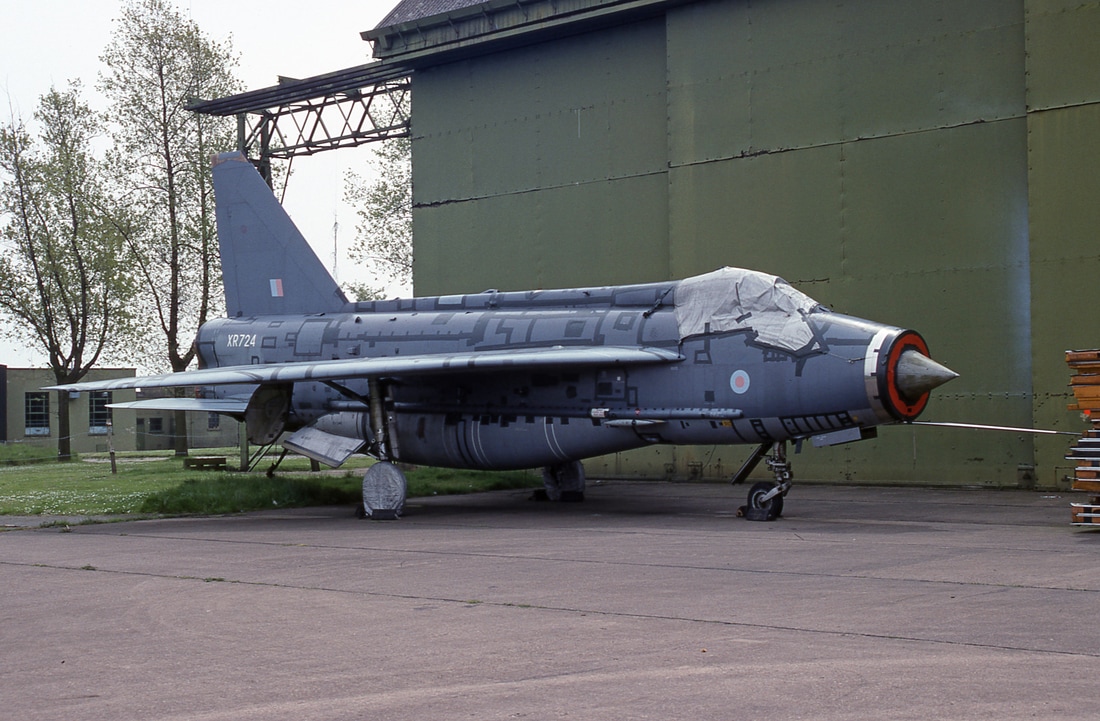 Lightning F.6 XR724
Once flying completely ceased, the airfield was sold off with the runway being removed. The control tower was demolished in 1995 due to concerns of illegal entry to the building and possible injury to those who should not have been in there in the first place. Today the hangars remain, as do many of the domestic/technical buildings. In 2012 the pan was broken up and removed.

A name that is often talked about in Binbrook folklore is Crash Gate 3. It was from here that many superb photographs were taken, and also another notable event took place. At the Crash Gate, a small group of enthusiasts decided to try and buy a Lightning. Well, they were successful, and the fruits of their labours can be found here: Lightning Preservation Group
​ 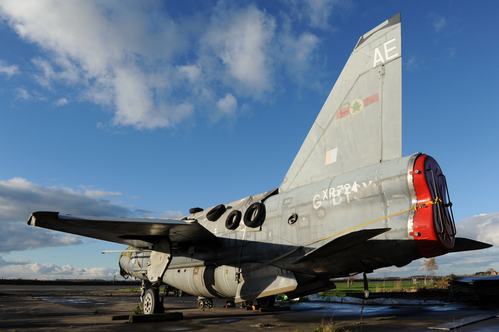 A Lightning T.5 - XS457 also resides in a dismantled state at the airfield.


A Heritage Centre has been established on the site of the former Control Tower. www.binbrook.demon.co.uk
Click on the link for images of Binbrook after closure - RAF Binbrook Airfield Buildings & Infrastructure