Words and Photos By Richard Hall
​
When World War Two ended in 1945, everyone was exhausted and war-weary. The last thing on people's minds was aircraft preservation. So it was that we lost many aircraft types to the scrap man. Today we have no Stirlings, Whitleys, Manchesters or Whirlwinds, to name but a few. The Wellington was another such aircraft that nearly faded into obscurity. Wellington T.10 MF628 survived the war and went to the Royal Air Force Museum at Hendon. However, this aircraft saw no operational service, which left just one that did.

Wellington Mk.Ia N2980 ditched, after losing power, into Loch Ness on 31 December 1940 while serving with 20 OTU. The aircraft had taken off from RAF Lossiemouth on Scotland's Moray Firth in the mid-afternoon, tasked with a navigation exercise. Piloting on this day was Sqn Ldr David Marwood-Elton with co-pilot Plt Off J.F. Slater in the right-hand seat. Six others were also on board for this exercise. Sergeants W.Wright, (Wireless Op/Air Gunner), C.Chandler, E.Ford, R.E.Little, Lucton (Navigators) and Rear Gunner J.S.Fensome.
​
Six men jumped with the pilot and co-pilot remaining at the controls. After the bailout, Marwood-Elton noticed a stretch of intense black through the clouds, which denoted water. He decided to ditch the Wellington in what turned out to be Loch Ness. The ditching was successful, with Marwood-Elton and Slater climbing out onto the aircraft's wing. The two pilots paddled ashore, and R-Robert sank into the depths. Of the six men who baled out, five survived, but rear gunner Fensome died after opening his parachute too early, which was then damaged by the aircraft's tailplane.

As it can be seen, learning to become bomber airmen could be a dangerous practice, and 12% of Bomber Command crews were lost through flying accidents in training. The surviving members of R-Robert went on to take part in operations with only WOP/AG Wright, and Pilot Marwood-Elton confirmed as surviving the war.

R-Robert first flew in the hands of Vickers Test Pilot Mutt Summers at Brooklands on 16 November 1939. Summers put the aircraft through its paces before delivery to 149 Squadron at RAF Mildenhall, as part of 3 Group coded OJ-R.
​
The Luftwaffe's fighters were equipped with 20mm cannon, which outranged the Wellington's .303 Browning machine guns and had far more destructive power. So not only could the Germans stay out of range of the RAF gunners, but a few hits from 20mm shells was enough to bring down a bomber, although the Wellington's geodetic design could take a lot of punishment.

The belief was shattered on 18 December 1939. Wellingtons of 9, 37 and 149 Squadrons set out to attack the German Navy and fared very badly in conditions of good visibility. This made the job for the flak gunners and fighter pilots all the easier. The Germans were somewhat surprised that the bombers attacked in conditions that were ideal for the defenders. This operation became known as the Battle of Heligoland Bight. R-Robert took part with 10 out of the 22 RAF aircraft participating shot down. The raid showed that bombers without fighter cover were vulnerable to enemy fighter attacks and signalled an end to unescorted daylight raids. A few years later, the USAAF 8th Air Force learned the same lesson again in their daylight bombing campaign over Europe. Despite a much superior defensive armament, their B-17 Flying Fortress and B-24 Liberator bombers were lost in large numbers to Luftwaffe fighters. It was not until the advent of the long-range fighter, the P-51 Mustang, which could accompany the bombers all the way to the target, did the tables turn.

R-Robert went on to carry out a number of raids in 1940 as part of 37 Squadron flying from RAF Feltwell, again part of 3 Group, until transfer to a training role with 20 OTU RAF Lossiemouth in October. By the time the Wellington ditched in Loch Ness, the aircraft had amassed just over 330 flying hours. Considering the high loss rate of bombers at this time, 330 hours was quite an achievement.

The discovery of R-Robert was a byproduct of a search for the mythical Loch Ness monster. In 1976 an American named Marty Klein was attempting to find 'Nessie' when his sonar equipment picked up what he considered to be the remains of a Consolidated Catalina PBY flying boat. In Edinburgh, the Heriot Watt University was developing remotely operated vehicles (ROV) to support the offshore oil industry on the Scottish Coast. It was decided in 1978 that the 'Catalina' would be a good trial to prove the submersible and the images brought back showed not a Catalina but a Wellington. So in 1979, a Royal Navy diving team investigated the submerged remains and identified them as N2980.

Plans were put in place to raise the Wellington. Over time the condition of the airframe had deteriorated through the attentions of local trawler nets and divers who were taking items as souvenirs. In 1984 Heriot Watt's Robin Holmes decided that an attempt should be set up to salvage the remains, and he set up a charity to achieve this, named the Loch Ness Wellington Association. As with any such project, a good deal of cost is involved, so the charity sought sponsors to raise the necessary funds.

R-Robert rose from the depths on 21 September 1985, and with the help from British Aerospace engineers, N2980 was back at her birthplace Brooklands, six days later. The Brooklands Museum then began restoring the aircraft to the condition that she was in on New Year's Eve 1940. The decision was taken to only partially recover the Wellington so that Barnes Wallace's geodetic designed airframe construction could be seen to full effect.

The world of aviation preservation owes thanks to Sqn Ldr Marwood-Elton for carrying out such a skilful ditching, allowing the aircraft to be recovered, restored and put on display. Without his skill, there would be no operational Wellingtons in preservation. 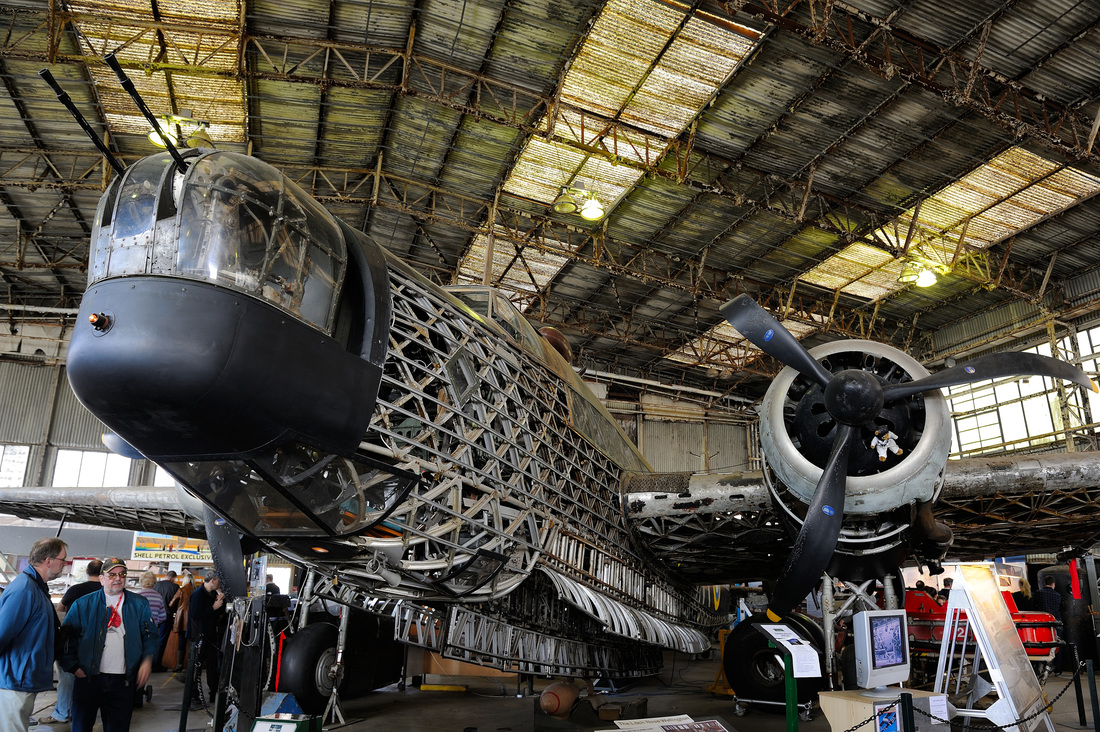