RAF Metheringham first came into operation in October 1943. Former air and ground crew will attest to the field being cold, bleak and isolated. It was home to 106 Squadron who flew Avro Lancasters. 106 Squadron moved to RAF Metheringham on 11 November 1943 and within a week were operational, sending 13 Lancasters to Berlin in a raid consisting of 440 aircraft.

I remember the first time I visited RAF Metheringham in June 2012. It was under threatening skies with the sound of thunder in the air. This weather was rather an apt atmosphere for visiting one of the many former Bomber Command Airfields located in Lincolnshire.

Our first port of call was the former Watch Office. Planning Permission has now been granted for a complete restoration of the Tower, which is good news all round. The current owner, Tim, was kind enough to show us around in between the showers of rain. The Watch Tower is typical of the type that was found all over Lincolnshire. It is a credit to Tim that he has gone to such effort to preserve this icon of World War Two airfield architecture, as so many have been demolished.

​
Further information regarding the Watch Tower can be found here - www.metheringhamairfield.co.uk 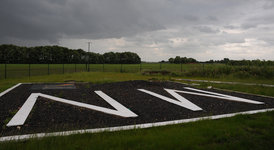 The Restored Signals Square
After completing our visit to the Tower we drove out onto the airfield itself. Part of the former runways and perimeter tracks have been turned into roads.
Located on one of the former perimeter tracks, this Memorial commemorates 106 Squadron and RAF Metheringham.
Located a little way up the road near the airfield, there are further remains to be seen. Also located at this site is the Metherington Visitor Centre, formed by the Friends of Metheringham Airfield (FOMA) to commemorate the former airfield and those who served there. There is also a Jet Provost T.4 (XS186) located at the centre in running order and can be taxied under her own power. Video of this can be found here - www.youtube.com