On 12 February 1942 an action took place in the English Channel which will go down in the history of the Fleet Air Arm as one of the most courageous fought during the Second World War. Six Fairy Swordfish torpedo bombers from 825 Squadron Fleet Air Arm took part in an attack on three German warships which resulted in all the aircraft being shot down with only five of the eighteen aircrew members surviving.

The Channel Dash as the operation became known worked fairly much flawlessly for the Kriegsmarine but was a disaster for the Royal Navy, as a catalogue of errors led to the warships passing right under the noses of the British without serious consequences.

In March 1941 the battleships Scharnhorst and Gneisenau had entered the port of Brest for repairs following a number of successful attacks on British Atlantic convoys. The two battleships were to be shortly joined by the heavy cruiser Prinz Eugen. The ships had been a menace to the convoys that were so vital to the British war effort and it was of high importance that as much as possible should be done to keep them out of action.

During their time at Brest the ships were under constant attack by Bomber and Coastal Command which reduced the ship's seaworthiness. Coinciding with this there was also a demand from Hitler that increased protection be given to occupied Norway, as he feared a potential British invasion. Combining these two elements the German Naval Command took the decision to bring all three ships back home to Germany.

A plan, known as Operation Cerberus, was devised for the ships to make a surprise sortie into the English Channel and then sail by the shortest route back to Germany, in this case past the Dover Straits.  An operation of this type had been foreseen and anticipated by the British, therefore a combined plan known as Operation Fuller was implemented by the Royal Navy and Royal Air Force to counter the threat of a breakout by the ships from Brest.

The RAF and Coastal Command flew constant patrols to monitor the position of the ships and to get early warning of their sailing, which planners were convinced would be easy to detect. There was also intelligence from Enigma code breaking, known as Ultra, which gave insight into the intentions of the Germans and their plans for the ships.

It was assumed that the vessels would leave by day and make the passage through the heavily defended Dover Straits by night. The reverse was to happen with the ships leaving Brest on the night of 11 February and making the run by day. This reversal in plans wrong footed the Royal Navy and RAF which led to a number of errors being made. By 11am on the 12th, the three ships and their escorts of destroyers and E-Boats had reached the Dover Straits virtually undetected. Fearing a massive assault by the British, the heavily defended battle group was provided with air cover from over 200 Luftwaffe day and night fighters.
He knew that the aircraft stood no chance in broad daylight against the heavily armed ships and their associated fighter cover. He pleaded with the First Sea Lord Sir Dudley Pond not to send the Swordfish crews on what was tantamount to a suicide mission. Pond's response was "the navy will attack the enemy whenever and wherever he is found". With these words the fate of 825 Squadron was sealed. Esmonde was ordered to attack and 825 took off from Manston at 12.25pm watched by the station's commander, W/C Tom Cleave, who gave a forlorn salute to each passing crew as he could foresee only too well what was to come.

Esmonde had been promised fighter cover from five squadrons of Spitfires. Only one squadron 72 led by S/L Brian Kingcombe made the rendezvous with the Swordfish which entailed just ten Spitfires covering the torpedo bomber’s attack. Esmonde circled over Ramsgate awaiting the other escort squadrons but he knew time was short and took the decision to go into the attack. Very soon the Spitfires were embroiled with the fighter escort which left the Swordfish vulnerable and open to attack. Within ten minutes of taking off and as they reached the half way point to the German ships,  Esmonde's squadron was set upon by the Luftwaffe fighters.

Two Staffels of Messerschmitt Bf 109 fighters came in astern of the wave hopping Swordfish and opened fire with cannon and machine guns. Some of the aircraft sustained damage to their fabric but no crews were injured. Evading the surprise attack the Swordfish again came under the protection of 72 Squadron and the Luftwaffe fighters were driven off.

At 12.50 pm the Swordfish saw their formidable target of two battleships, a heavy cruiser, an array of destroyers and E-Boats, but more menacingly a vast armada of Luftwaffe fighters stacked up above the ships from 50ft to 2,000ft. As the first trio of Swordfish led by Esmonde (W5984) with Sub Lt (A) Kingsmill RNVR (W5907) and Sub Lt (A) Rose RNVR (W5983) in trail made their attack run, the Luftwaffe fighters, with flaps and undercarriage lowered to match the slow bi-planes speed, bore in and opened fire on the fairly much defenseless bi-planes. A .303 gas operated Vickers machine gun, which was the Swordfish rear armament, was no match for a fast cannon armed fighter. Violently weaving the three aircraft attempted to evade the fighters, with some success and soon they were back on course towards the ships. ​
​
Fatally wounded and with his dying hand, Esmonde released the torpedo, the aircraft nosed up slightly before crashing into the waves and disintegrating. Esmonde was killed along with his crew Lt Williams RN and PO (A) Clinton. ​​The same fighters also accounted for the Swordfish of Kingsmill and Rose. Of Kingsmill's (wounded) crew, he, Sub Lt (A) Samples (wounded) and PO (A) Bunce (wounded) all survived the ditching that occurred after they were shot down, subsequently being rescued by a British ship. Rose (wounded) survived the ensuing ditching, along with Sub Lt (A) Lee but the third crew member PO (A) Johnson was killed and went down with the Swordfish when it sank in the Channel.

The following flight of Swordfish flew on into the maelstrom of fire and each was shot down. The crews Lt Thompson RN (V4523), Sub Lt (A) Parkinson RN, L/A Tapping, Sub Lt Wood RN (W5985), Sub Lt (A) Fuller-Wright RNVR, L/A Wheeler, Sub Lt Bligh RNVR (W5978), Sub Lt Beynon RNVR and L/A Granville-Smith were all killed, with only the body of Granville-Smith being recovered. None of the torpedoes dropped found their targets. The entire combat from take off to the downing of the last Swordfish lasted just twenty minutes. The three warships reached their destination in Germany despite the efforts of the Royal Navy, the RAF and coastal shore batteries, however, Scharnhorst and Gneisenau were both damaged by mines in the North Sea.
​
Lieutenant Commander Esmonde was posthumously awarded the Victoria Cross for leading this heroic attack with all other crew members either given gallantry medals or Mentioned In Dispatches. The German War Diary entry for the 12 February 1942 stated “the mothball attack of a handful of ancient planes piloted by men whose bravery surpasses any other action by either side that day”.

The King has been graciously pleased to approve the grant of the Victoria Cross, for valour and resolution in action against the Enemy, to:

"On the morning of Thursday, 12th February, 1942, Lieutenant-Commander Esmonde, in command of a Squadron of the Fleet Air Arm, was told that the German Battle-Cruisers SCHARNHORST and GNEISENAU and the Cruiser PRINZ EUGEN, strongly escorted by some thirty surface craft, were entering the Straits of Dover, and that his Squadron must attack before they reached the sand-banks North East of Calais.

Lieutenant-Commander Esmonde knew well that his enterprise was desperate. Soon after noon he and his squadron of six Swordfish set course for the Enemy, and after ten minutes flight were attacked by a strong force of Enemy fighters. Touch was lost with his fighter escort; and in the action which followed all his aircraft were damaged. He flew on, cool and resolute, serenely challenging hopeless odds, to encounter the deadly fire of the Battle-Cruisers and their Escort, which shattered the port wing of his aircraft. Undismayed, he led his Squadron on, straight through this inferno of fire, in steady flight towards their target. Almost at once he was shot down; but his Squadron went on to launch a gallant attack, in which at least one torpedo is believed (sic) to have struck the German Battle-Cruisers, and from which not one of the six aircraft returned.

​His high courage and splendid resolution will live in the traditions of the Royal Navy, and remain for many generations a fine and stirring memory"

​On 26 April 1942 a body was spotted in the Thames Estuary and it was clear it had been in the water for a period of time, thereby identification was not readily apparent. The body was supported by a partially inflated life-jacket of the type used by aircrew. After retrieval the body's outer garments were removed to reveal the uniform as worn by a Royal Navy Lieutenant Commander. Further evidence suggested this was the remains of a pilot and a gold ring on the left little finger with the inscription 'Jerusalem', confirmed that this was Eugene Esmonde VC. On 30 April 1942 Esmonde was laid to rest with full naval honours in Gillingham New Cemetery and so the sea had given up a very brave and fearless aviator.

By any reasoning this was an outstanding feat of airmanship and a display of absolute courage in the face of overwhelming odds. It truly deserves to go down in the history of the Fleet Air Arm as one of their finest moments.
​
​In Remembrance

St Bartholomew The Fleet Air Arm Memorial Church Yeovilton on 9 Febraury 2017 was the venue for a commemorative service to remember those members of 825 Squadron Fleet Air Arm who flew or were lost, while taking part in the “Channel Dash” seventy five years ago.

The service was as follows -
After the service on a typically cold and windy late winter's day, the congregation gathered out on the airfield in the concluding part of the afternoon's proceedings. The assembled crowd included attendance by members of the Royal Navy, Fleet Air Arm, local dignitaries and the broadcaster/historian Dan Snow.

​In a further tribute, Lynx Wildcat HMA.2 helicopters from the modern day 825 Naval Air Squadron flew a four-ship flypast over the Royal Navy Historic Flight's Swordfish II LS326, which at present, is minus its Bristol Pegasus engine and assembled members of the service's congregation. 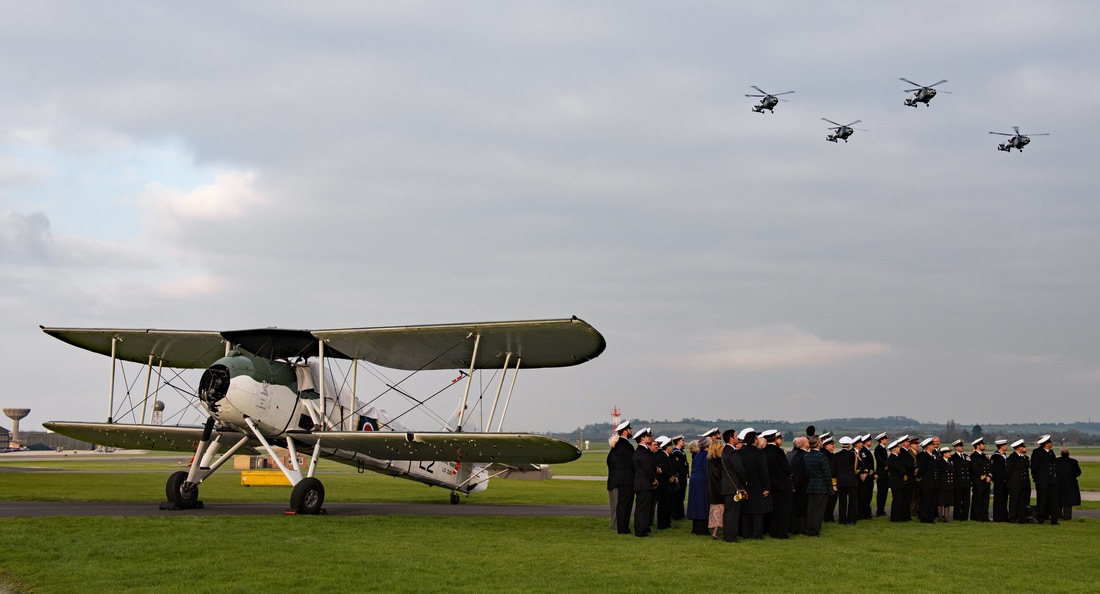 With thanks to Chris Cannon - www.simplyplanes.co.uk for the invite to the above service.
​
A Previous Attempt
The Gneisenau was moored against the wall of the north side of the harbour protected by a stone mole bending around to the west. The area was very heavily defended by anti-aircraft guns. Flying in at 50ft Campbell released his torpedo at a range of 500 yards which hit the German ship below the waterline. As the aircraft climbed away it was hit by the defending guns and crashed into the harbour killing all on board. Reports of this brave attack filtered back to Britain and on 13th March 1942 Campbell was awarded a posthumous Victoria Cross for conspicuous bravery. His citation read "By pressing home his attack at close quarters in the face of withering fire, on a course fraught with extreme peril, Flying Officer Campbell displayed valour of the highest order".  ​​
​
Sources
Return To Home Page