On 28 July 2013 The Lightning Preservation Group (LPG) held a double Quick Reaction Alert (QRA) at Bruntingthorpe. The event was to commemorate the 25th anniversary of the Lightnings withdrawal from RAF service and also the arrival of the LPG’s Lightning F.6, XR728, at Bruntingthorpe in June 1988.

XR728 has been out of action for a while but the LPG managed to get the aircraft back into working order for the event. This gave the tantalising prospect of seeing two Lightnings performing the QRA and of a double fast taxy run.
Click on image to enlarge 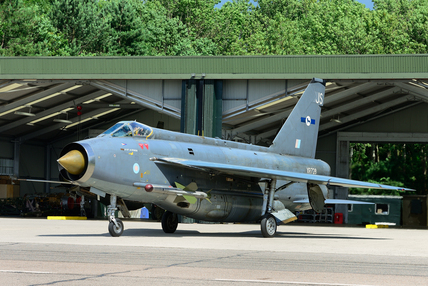 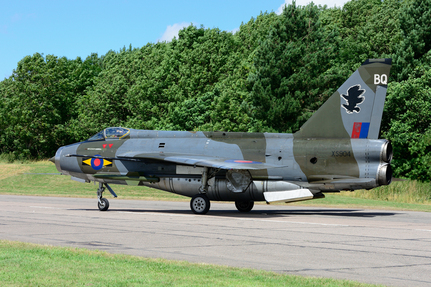 A little later it transpired that the contacts had split up so Lightning F.6 XS904, piloted by Squadron Leader Dennis Brooks, was also scrambled to intercept. After the hiss of the Avpin starter and the low whine of spooling Avons was heard, XS904 emerged into the sunlight to join XR728 in the cold blue skies above the North Sea.
The pilot to ground controller exchanges continued during the intercept until the Lightnings were ordered to return to base. At the end of the sortie the Lightnings taxied back to the QRA Shed where the ground crews were awaiting their return. Here the Lightnings brakes were checked and the aircraft allowed to cool down before being taken back into the QRA Shed.
During the afternoon the gathered crowd also witnessed taxy runs from Buccaneer S.2B XW544, Canberra B(I)8 (mod) WT333 and Hunter T.7 XL565. 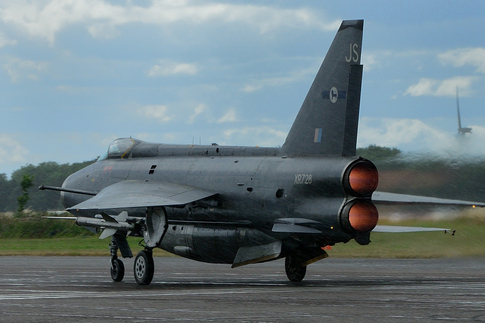 At 16.00hrs the two Lightnings carried out a double fast taxy run. Right on que the heavens opened just at the moment that the throttles on XR728 were advanced.

​With the ear splitting sound of two afterburning Avons on full chat, the Lightning quickly accelerated down the runway. 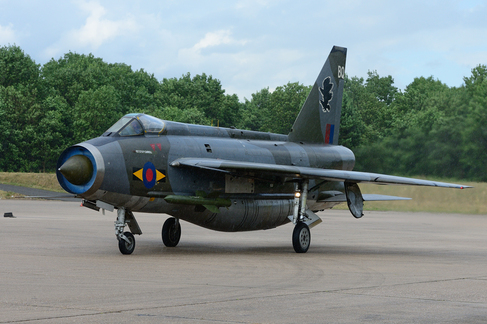 XS904's turn now came and with the characteristic vapour halo in the Lightning's intake, the aircraft surged off  in pursuit of her sister Lightning. As the Avon thunder receded into the distance both aircraft deployed their drag chutes to help slow their rapid progress. It was quite fitting that it rained as after all the Lightning was designed to be an all weather fighter.
A little later the two Lightnings taxied in line abreast up the vast runway before shutting down in front of the appreciative crowd.

Once again the LPG have organised and pulled off a superbly unique event. It is not often that you get to see something that ended 25 years ago re-enacted with such realism. A big well done must go to all at the LPG who made this event possible.