​On 1 April 2018, the Royal Air Force celebrated one hundred years since its formation in 1918 as an Independent Force. Eighteen years later, in 1936, Bomber Command was formed, and within three short years, its 23 squadrons were taking the fight to Hitler's Third Reich. Bomber Command was in action from the first day of the war and for over five and a half gruelling years before peace once again returned to Europe. In that time, 55,573 Bomber Command crew were lost, an attrition rate second only to the German U-Boat crews. It is fair to say the Command's personnel never got the recognition they deserved for the sacrifices made. In part, the benefit of hindsight allowed some to incorrectly question the validity and morality of the bombing campaign waged throughout the war.

The Command's Commander in Chief (C in C), Sir Arthur Harris, who for many years had held the view that Germany could be defeated by bombing alone, was in the later stages of the war increasingly coming into conflict with Winston Churchill. However, the German will to fight remained unbroken, and their industrial output was not significantly weakened. The bombing of Dresden in February 1945, which both Churchill and the Russians requested, resulted in a considerable loss of civilian life. When once known, Churchill distanced himself from Bomber Command even though they were following his desire to assist the Russians. This dealt a fatal blow to the Command from which it never recovered and has tainted Harris's Old Lags, unfairly, for many decades since. At the war's conclusion, no campaign medal was struck for the Command. This omission was perceived as a snub by their C in C Sir Arthur Harris, who refused a peerage in response. It is safe to say that it is only in recent years that the Command's personnel have started to get the respect they so richly deserve.

The event included attendance by surviving Bomber Command veterans who at last saw recognition of their service many decades past, even though they are all well into their nineties.

Regrettably, it has taken so many decades to get deserved recognition, but the Memorial in Hyde Park and the IBCC have gone some way to redress the injustice. Finally, at least some veterans have got to see an appreciation of their service that helped to keep this country free.

Origins of the IBCC
​
"You think of these things, and usually people are not interested, but it seems with this one they were".
​
These are the words of the late Tony Worth, whose vision and determination in creating a lasting memorial to those who served and were lost while operating with Bomber Command in the Second World War is what we see at the IBCC today. ​
​
​
Location
The Memorial Spire
Set at a height of 102 feet (31.09m), the Memorial Spire is the same length as an Avro Lancaster bombers wingspan, an aircraft with a deep association with Lincolnshire. The Memorial is designed to celebrate the connection between sky and earth while signifying the destruction of war through the fragmented wing forms of the central spire.

The structure is 16 feet (5m) wide at its base, the same as a Lancasters wing root. The Memorial is constructed from Corten 'weathering' steel and weighs 55 tons. It has the distinction of being the UK's highest war memorial and was built in two sections, with erection taking place on 10th May 2015. ​
​ 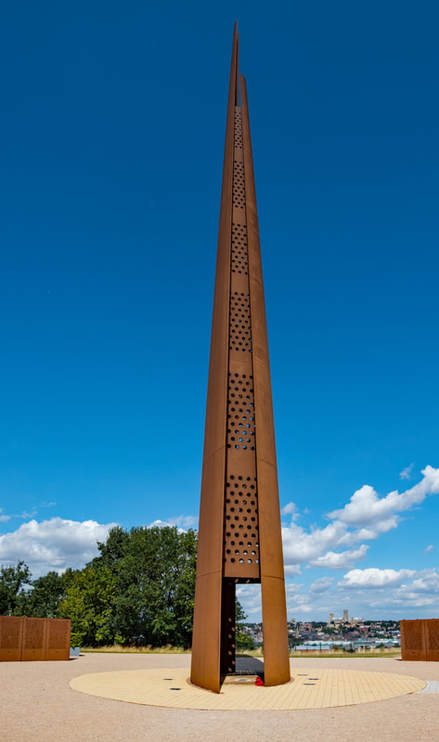 The Memorial Spire
The Memorial Walls
Each name is laser cut on the panels, where there is duplication, and the same name appears; the last digits of the person's service number is given to help relatives identify their loved ones. All panels are numbered to aid the location of names and are designed to allow poppies to be placed as a mark of remembrance. The panels are clustered in such a way as to group together those lost while based in Lincolnshire and those serving elsewhere in the Command. The names list no rank, medals or awards and all those lost are treated as equals.

The Peace Gardens
The Chadwick Centre
IBCC Website - https://internationalbcc.co.uk
​
Veterans Stories - ​https://internationalbcc.co.uk/history-archive/veterans-memories
​
The Volunteers
As is the case with many such ventures, the IBCC would not be possible without the work and dedication of its volunteers. From staffing the Centre during opening hours to the ongoing research into crews lost, guiding the public and maintaining the grounds, their help is paramount to the IBCC's continued operation and success.

​
The Station Trees​
​
Twenty-seven lime trees have been planted to commemorate the bases from which Bomber Command aircraft flew in Lincolnshire. The following photographs show each bases squadrons and their losses.
​ 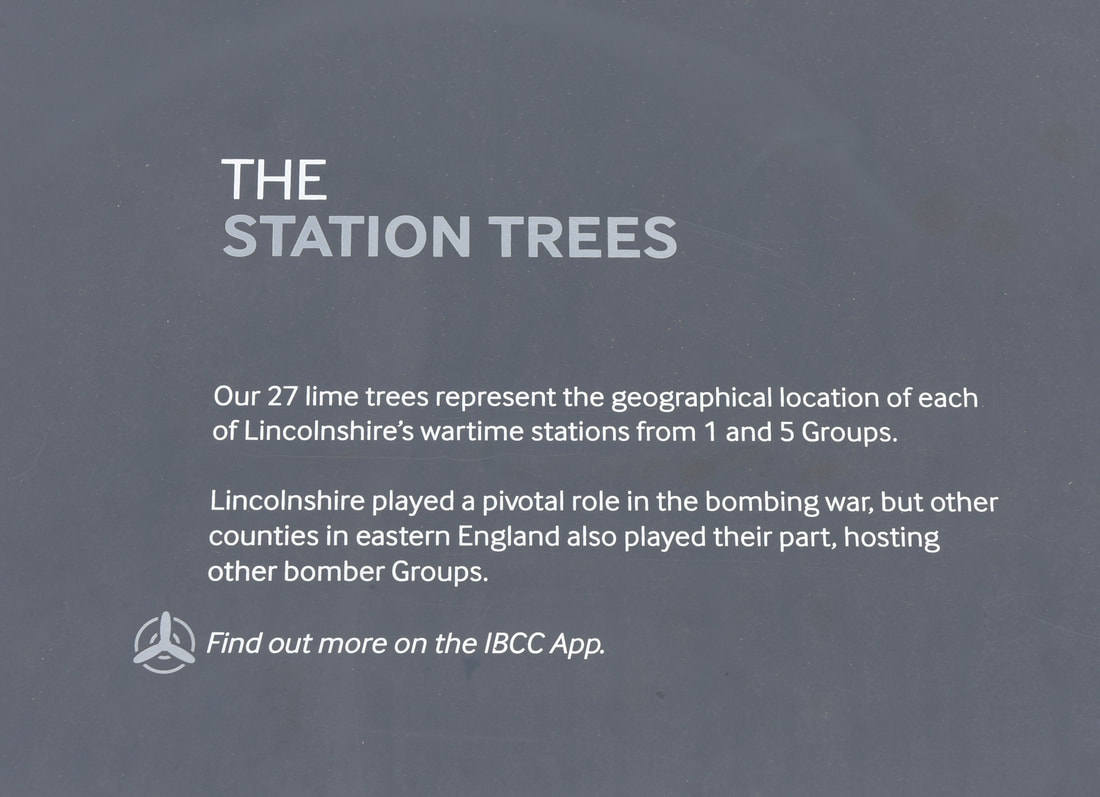 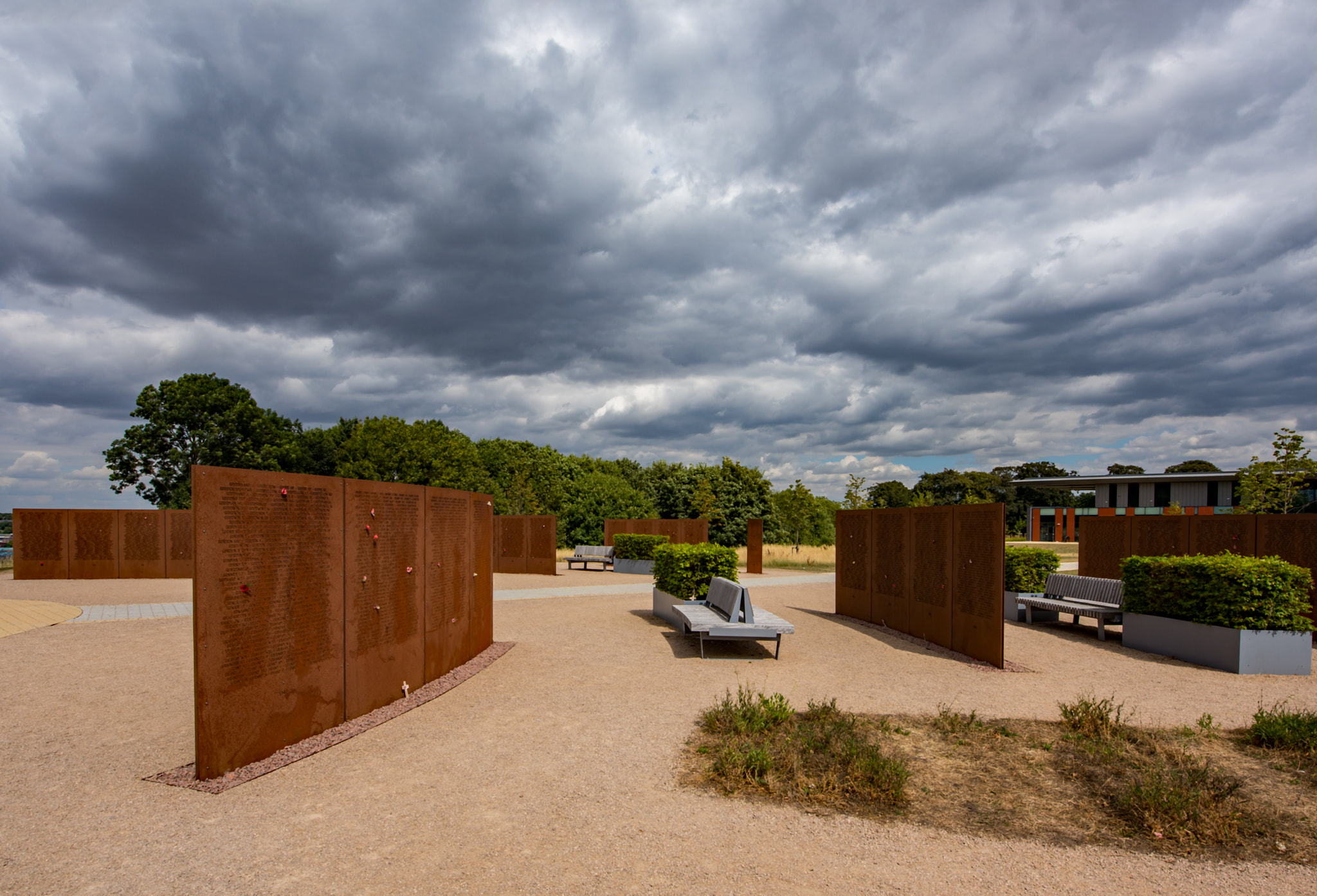 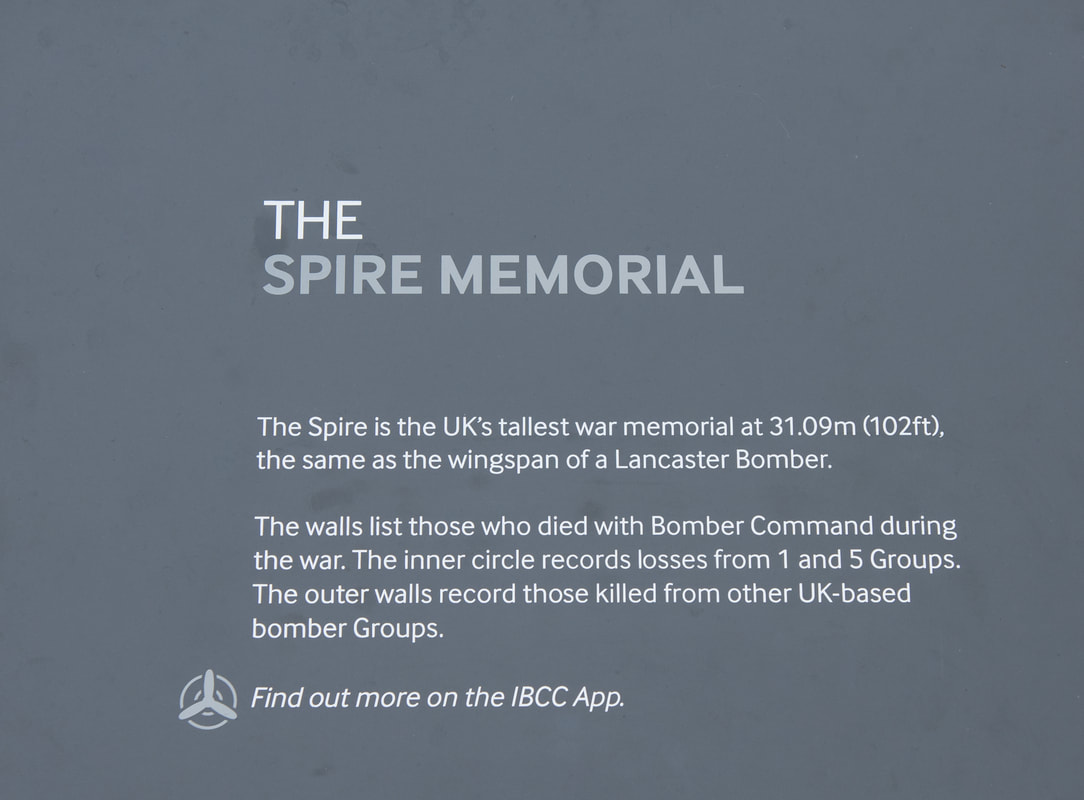