There are few things as fickle as English weather and the 3 May 2015 was no exception. The much anticipated airshow held at Dalton Barracks started the day wet and continued that way on and off throughout the day. This led to some very trying conditions for Neil Porter, his team and aircrews alike. At times the weather brought back memories of the Last Lightning Airshow at RAF Binbrook in August 1987, where conditions were quite appalling but the show went on nonetheless.

On the evening before the Airshow the static display was opened up for photographers to undertake a Night Shoot. The conditions were a bit on the breezy side but the rain did hold off before making an unwelcome appearance to dampen down proceedings. Images from the Night Shoot can be seen by clicking the link below.


However, the weather was not all that tried to disrupt proceedings. As with anything mechanical it can and does go wrong, especially in the world of aviation. A number of aircraft cancelled on the lead up to the show and also on the day due to defects and also again due the weather. The BBMF's Lancaster was due to land at the show but during the week with the weather conditions becoming known the appearance was reduced to a fly-by. Even this did not happen due to a technical issue with the Lancaster on the day which led to an even bigger problem with the aircraft later in the week, information of which can be found here - www.bbc.co.uk

Such a reduction in performers would have usually seriously curtailed proceedings but as ever the Show's resourcefulness brought in a number of replacement acts.
​
The prevailing conditions also saw a reduction in the aircraft within the static area but some did make it and are shown below. (click on images to enlarge)

The primary aim of Abingdon's Air & Country Show is to raise funds for the Thames Valley Air Ambulance. This is a charity that receives no official funding and relies entirely on donations from the public and sponsors in the areas it serves. No one knows when they might want to receive life saving assistance from an Air Ambulance and the need for help to arrive in that "Golden Hour" is paramount.

Further information about the charities work can be found here -www.tvairambulance.org.uk
With skies beginning to darken from the West an aircraft that has often been seen in the static park at Abingdon took to the skies for a debut display. Bronco Team Demo's Rockwell OV-10B Bronco 99+18 (below) undertook a spirited routine in the capable hands of Tony De Bryn. Designed as a light attack and observation aircraft the Bronco has seen service with the US Air Force, Marines Corps, Navy and foreign powers including Columbia, Philippines, Thailand and Indonesia. Team Bronco's OV-10B was flown by the German Luftwaffe as a target tug with the last of the type being retired in 1990.
Following this, one of the more curious items on the airshow circuit began its display sequence. RotorSport Calidus Autogyro G-ULUL flown by Peter Davis of Gyro Air Displays, is something a bit different. The display would to many evoke memories of the late great Wing Commander Ken Wallis, who was often to be seen flying his autogyros in UK skies. The routine was very spirited from this very small aerial craft and one which is hoped will be seen at more shows in the future.
Looking around the assembled crowd it became evident that many were not willing to endure the persistent rain and were packing up to leave. In many ways they could not be blamed as there appeared to no let up on the horizon and the rain looked as though it had set in. From the author's perspective it was decided to give it to 4pm to see if it cleared, and surprisingly it did. When all appeared to be lost the weather again changed and the skies lightened.

To see the Spitfire and Typhoon duo holding towards the West was an absolute revelation and meant a hastened effort to get back to the crowdline. Abingdon was the public display debut for the duo that has been commissioned to commemorate the 75th anniversary of the Battle Of Britain and the pair certainly did not disappoint. Eurofighter Typhoon GR.4A ZK349 has been repainted in the scheme of Hawker Hurricane P3576 of No 249 Squadron that was flown by Flight Lieutenant J.B. Nicholson. The Spitfire in the duo is the Battle Of Britain Memorial Flight's MK Lf XVIe TE311, itself once based at Abingdon in the 1980's as a travelling exhibit with the RAF Exhibition Flight.

On 16 August 1940 Red Section of No 249 Squadron was being led by Nicholson from Boscombe Down. In combat with Ju88's and Bf110's, Nicholson won Fighter Command's only Victoria Cross awarded during World War Two. With his Hurricane already in flames from being hit by gunfire from a Bf110, Nicholson was trying to bail out of the stricken aircraft when he saw another Bf110 cross his gunsight. Nicholson stayed in the Hurricane and kept pressing the firing button until the Bf110 was hit and dived away to destruction. Only then did he bail out but his ordeal did not end there, for on his descent he was fired at by members of the Home Guard.

The Spitfire - Typhoon duo are easily going to be one of the highlights of this year's airshow scene with the pair putting on a polished routine that includes opposition passes and close formation flypasts. It is interesting to note that in 1985 at RAF Abingdon's Battle Of Britain At Home Day Airshow, a pairing of a Tornado F.2 and a Spitfire took to the skies to celebrate the 45th anniversary of the Battle Of Britain.
Following on from the Meteor's display the next item was Kennet Avaition's North American AT-6D Harvard III G-KAMY flown by Lt Commander Chris Gotke of the Royal Havy Historic Flight. Chris has recently been awarded an Air Force Cross for his airmanship and courage in landing Sea Fury T.20 VX281 at RNAS Culdrose following an engine failure in July 2014. 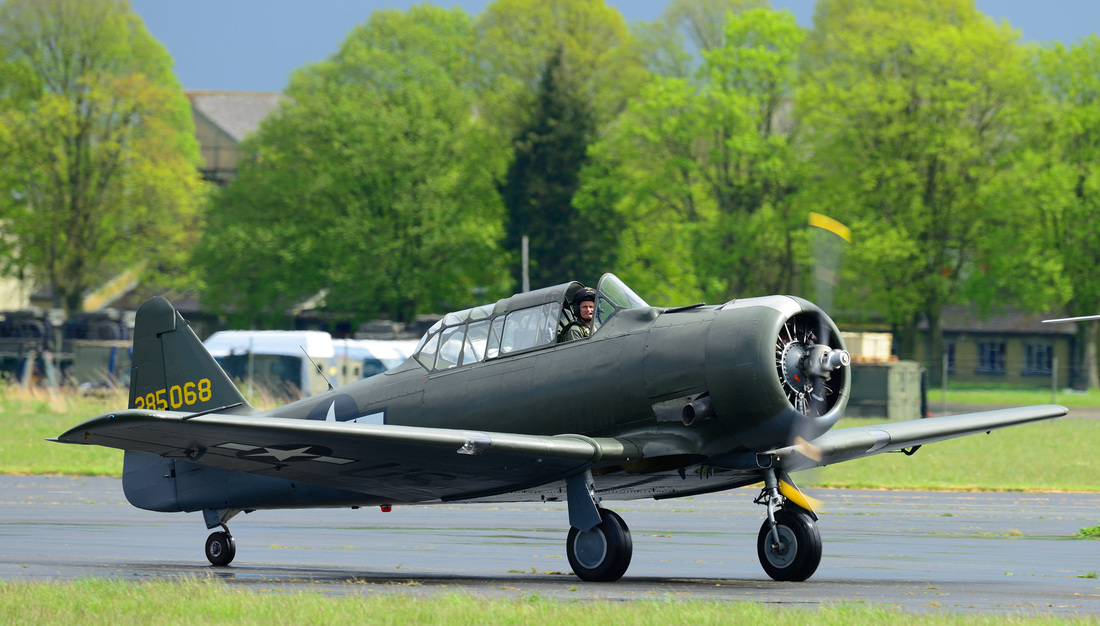 With the weather that had been experienced on the day, full credit must go to the Battle Of Britain Memorial Flight for sending Douglas Dakota C.3 ZA947 (below left) to display. The skies again were darkening as the Dakota run through her routine, with the load master in the rear obviously enjoying himself and offering the crowd a cheery wave. As more rain threatened the Twister Aerobatics Team undertook their display flying Silence SA1100 Twister aircraft.

Next on the agenda was Plane Sailings Consolidated PBY-5A Catalina G-PBYA (below right) which returned to Abingdon having flown earlier to display at Old Warden's Season Premier Airshow. The Catalina's white colour scheme made an interesting contrast against the dark skies as the airshow began to draw to a close.

It was quite a surprise to look to the South West to see the the shapes of a Spitfire and Hurricane holding for their display run in. Few would have thought a couple of hours ago that there was any chance of seeing these two aircraft over Abingdon, but here they were doing what the British do best, snatching victory from the jaws of defeat. Hawker Hurricane MKIIc PZ865 joined Spitfire MK Lf XVIe TE311, which had previously displayed with the Typhoon as a truly fitting show finale. 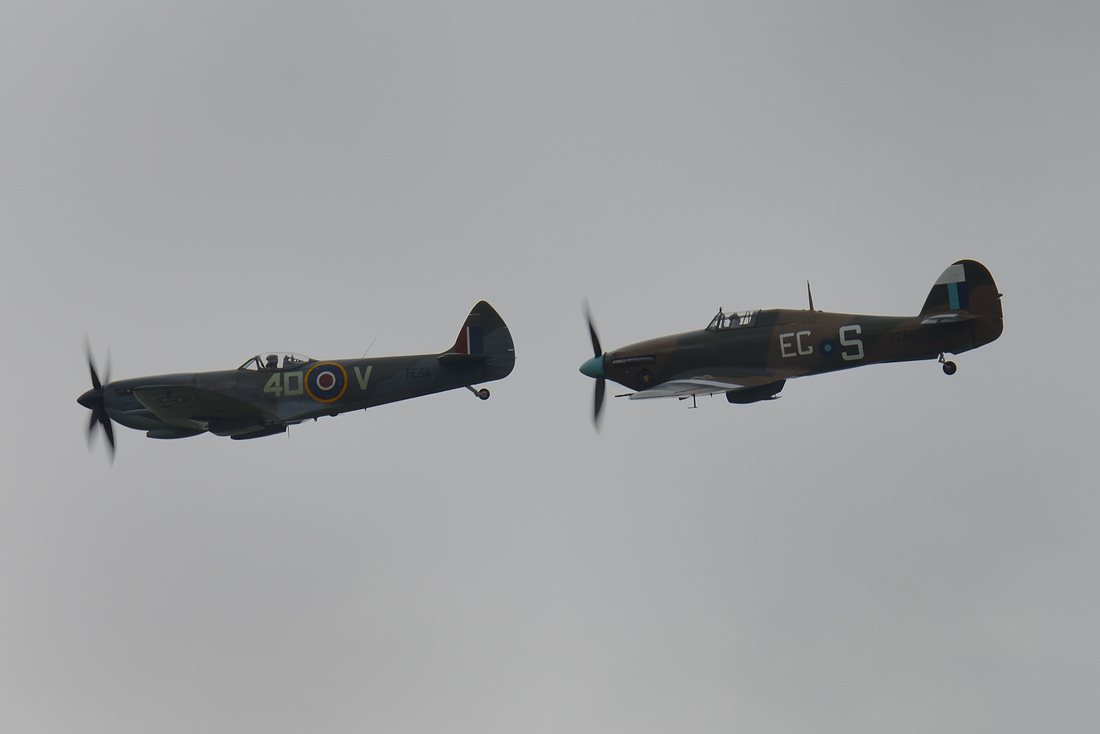 So that was a conclusion to a day of some very low points due to the weather and also some highs when in the end nature failed to defeat, on this occasion, the true spirit of the Great British Airshow. Full credit to Neil Porter and his Team for pulling this one out of the bag and here's looking forwards to next year's Abingdon Air & Country Show.

With thanks to Paul Fiddian, Jo Ayres, Phil Whalley & Graham Summers for the superb company on the day.
​
Departures 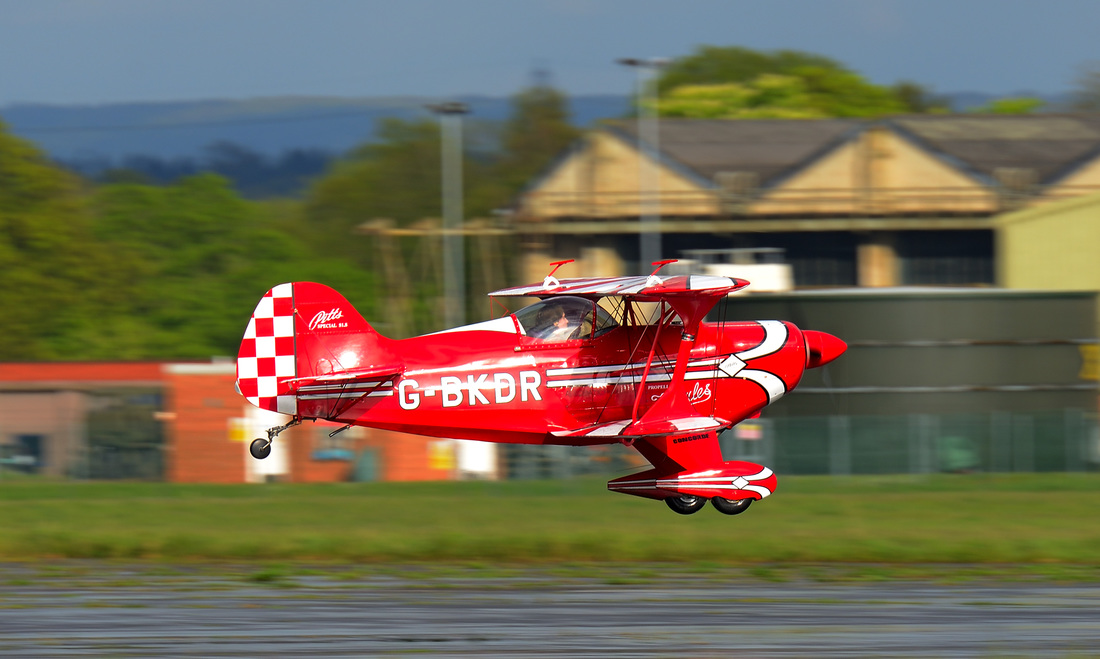 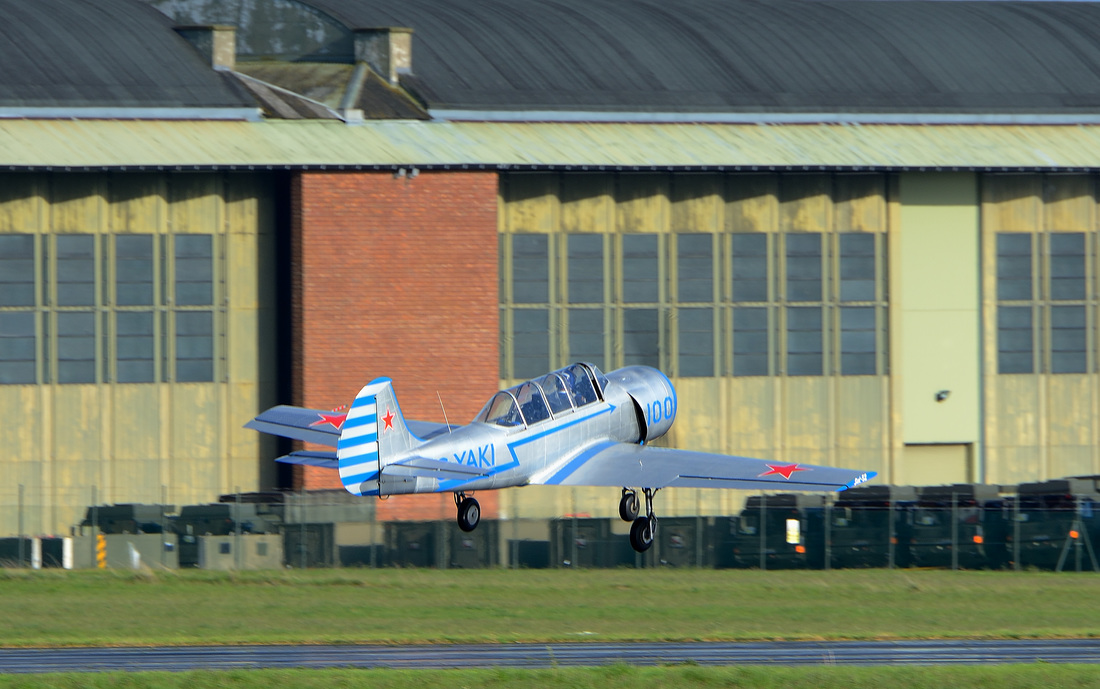 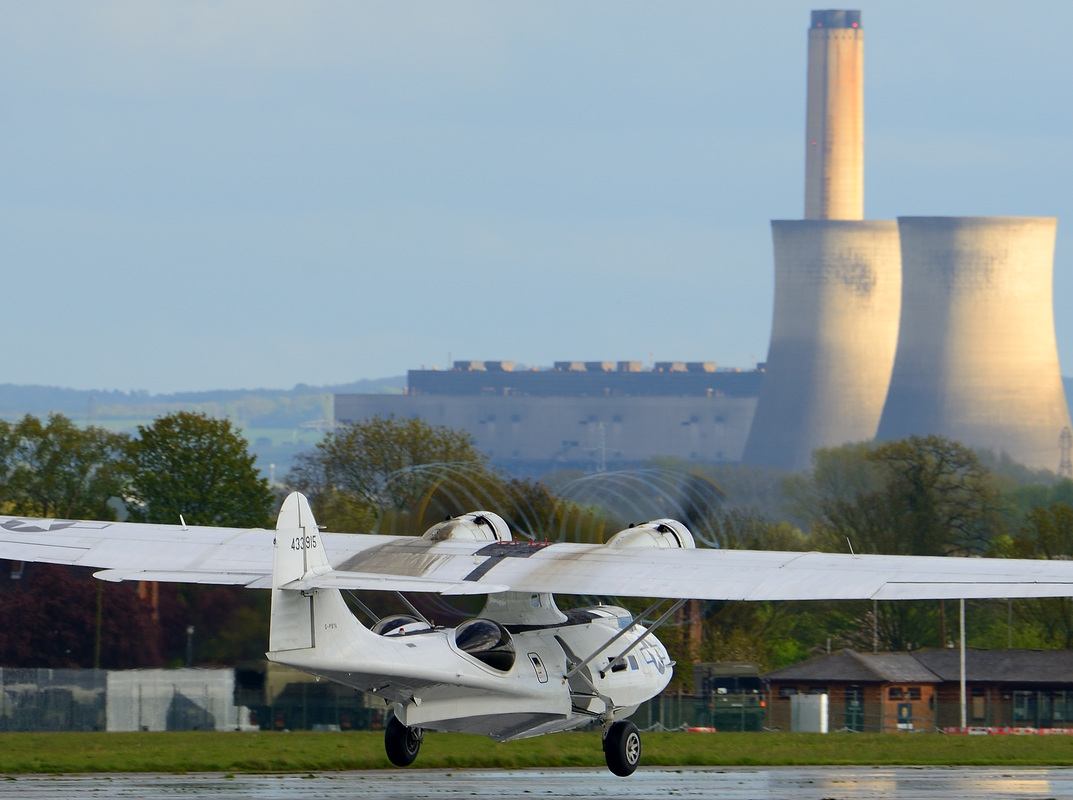 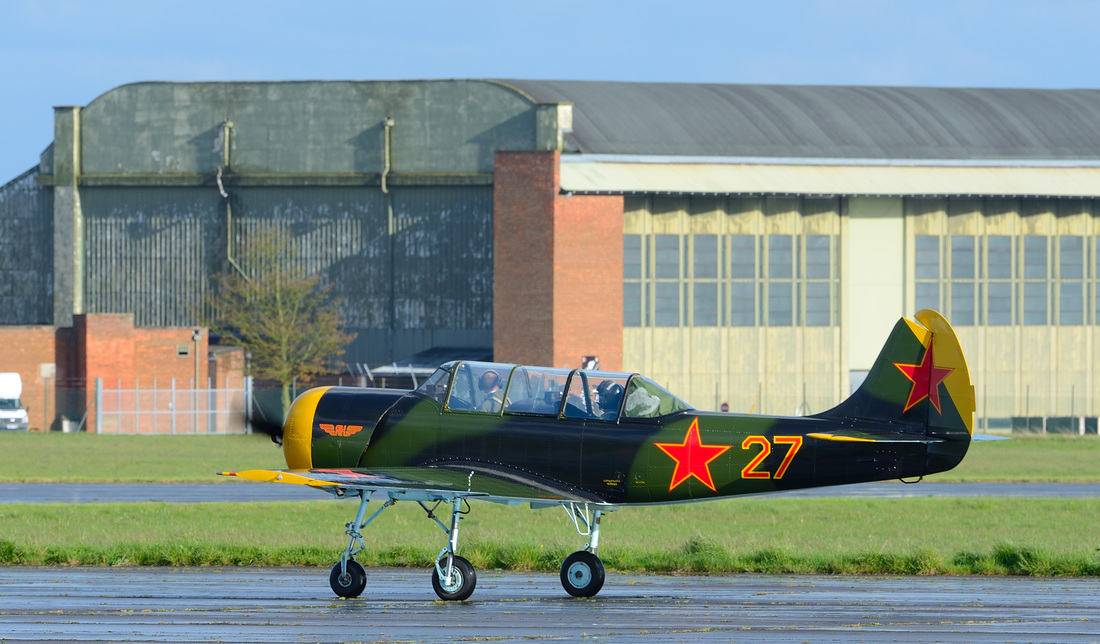 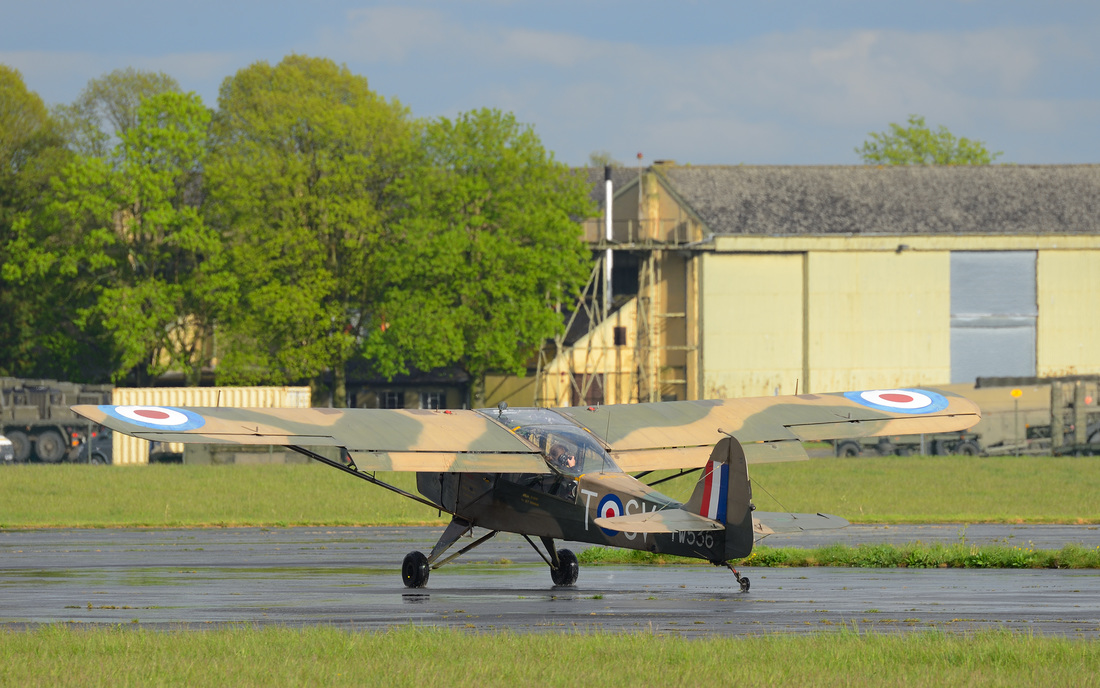